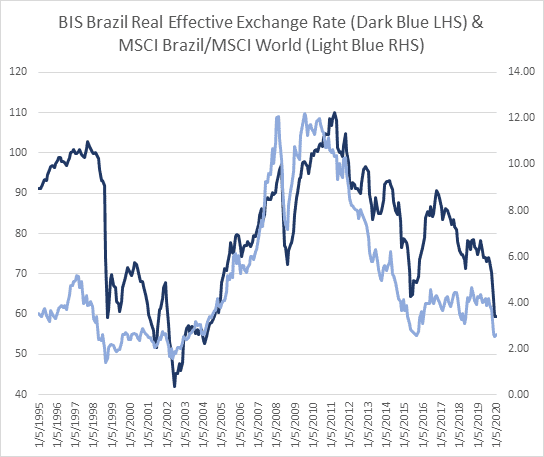 Over the past three months, US equities have continued to outperform emerging market equities (in dollars) despite the more heroic valuation starting point. Jon Garner at Morgan Stanley suggests that the US (and developed markets) are also more likely to outperform emerging market equities looking forward. That would be contrary to the relative performance following the episode in 2008. As we noted last week, EM rallied around 170% in outright and 80% in relative terms compared to the United States from the low in 2008 to the peak in 2010.

Plausible reasons for the potential reversal of leadership in this crisis are; 1) greater policy stimulus in developed markets; 2) the probable regime shift to fiscal policy financed by monetary policy; 3) leverage, cash flow and capex constraints in parts of EM; and 4) the relative size of Chinese stimulus compared to the episode in 2008. Put another way, Jon argues that many of the dynamics of the 2009-10 recovery have reversed. Previously, de-leveraging households in developed markets and more aggressive stimulus in emerging markets (led by China) drove leadership from commodity exporters and EM domestic demand stocks, whereas emerging economies appear more constrained in this cycle. We would make a few additional observations.

First, although emerging markets may have less domestic policy firepower and flexibility in this crisis, they remain intimately linked to final demand in the developed world and via the dollar as the reserve currency. Therefore, unprecedented policy stimulus in the United States that supports external demand for emerging economies will also be beneficial for growth and corporate profits. The performance of MSCI EM has tended to be correlated to the US manufacturing ISM and inventory cycle connected through the global supply chain and given the US remains the key source of global final demand (chart 1). On the negative side, global trade has clearly been retarded by the US-China dispute over the past few years and will likely remain so looking forward. 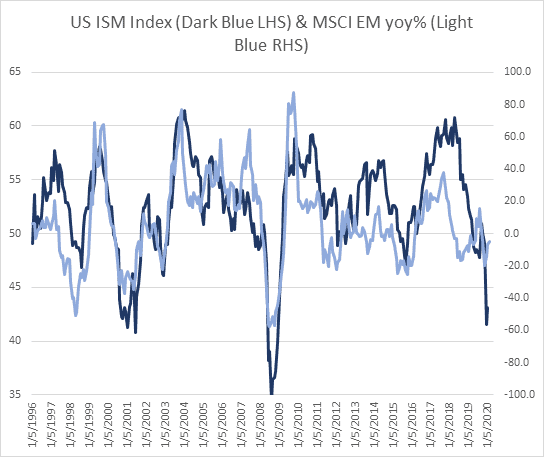 Second, and related to the point above, the Fed’s commitment to increase dollar liquidity directly and via swap lines with a number of central banks, also eased funding pressure and credit spreads in emerging markets as well. In turn, that contributed to a depreciation in the US dollar which has historically tended to benefit emerging market assets.

Third, the composition of the emerging market index is very different from the 2008/9 crisis. Technology (internet and semiconductors) is almost 30% of the MSCI EM index, that is considerably larger than in 2008 (when materials, energy and financials dominated) and comparable to the US stock market in terms of technology exposure.

That said, EM technology companies tend to be suppliers of component parts in contrast to the large US technology companies which control the intellectual property. For example, Apple and their IOS system. The big picture point here is that although the index composition of technology has increased in EM, US companies (in aggregate) have had superior returns on equity compared to EM which is also true at a broad market level (chart 2). 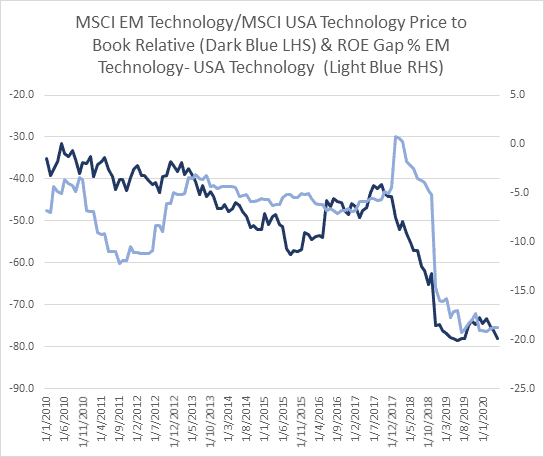 As we (and others) have noted, the fabulous five US technology companies (Apple, Amazon, Alphabet, Microsoft and Face Book) explain a large proportion of US outperformance or exceptionalism both in terms of relative returns and profits. Stated differently, US outperformance has been warranted by conditional valuation or relative earnings. On the positive side looking forward, EM technology is also a beneficiary of unprecedented global liquidity, low discount rates and trades at a material discount to developed markets.

The final point to note is that cyclical sectors in emerging markets (financials, industrials, materials and energy) still trade at 71% discount to US equities and only 1.1 times book value. While EM cyclicals have also rallied from the March low, the trough was comparable to 2009 and not markedly above the revulsion level during the Asian and Russia default crisis (chart 3). 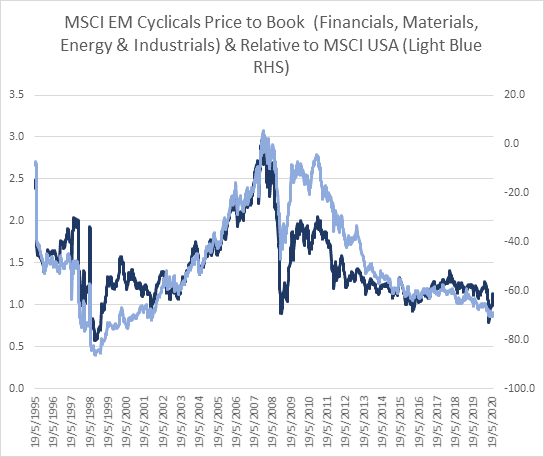 It is also interesting to note that MSCI EM has a 2% point superior free cash flow yield compared to the United States. That has improved considerably relative to 2010-11 when EM entered a relative bear market against the United States (chart 4). 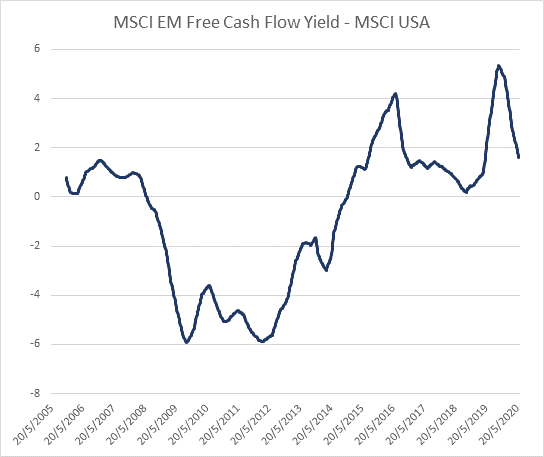 In conclusion, our sense is that a barbell of underappreciated cyclicals and inexpensive secular growth in Asia has considerable upside. Even if EM policy makers have less firepower or flexibility, aggressive stimulus in developed markets and dollar weakness is potentially very bullish for EM. The outright and relative valuation starting point is also compelling.

One of my favourite behavioural case studies from a macro perspective is the rise and fall of Brazil. The currency and the stock market went from complete crisis and revulsion levels of valuation in 2001, to an economic miracle according to the Economist magazine by late 2009. It then proceeded to de-rate again over the following decade until the current episode where the currency has once again depreciated to a 41% discount on a real effective basis and the equity market near to the 2001 level in relative price terms. To be fair, the equity market valuation is less extreme today (chart 1).

From a big picture perspective it was not a coincidence that the rise and fall of Brazilian assets coincided with the commodity super cycle after China joined the WTO in 2001. As a producer of key commodities like iron ore, the relative performance of the stock market was correlated to the terms of trade, which in turn had an influence on corporate profits, national income and the domestic business cycle (chart 2). 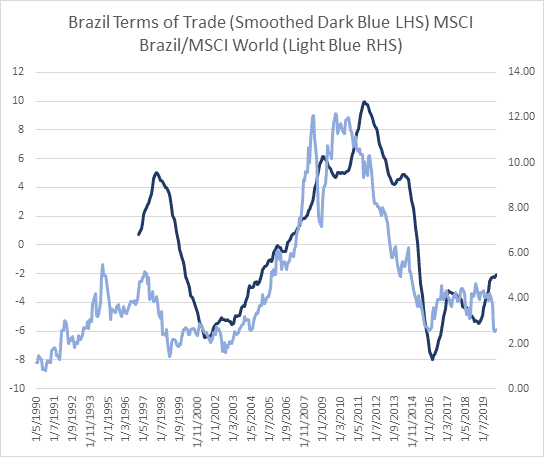 The critical point was that the entire boom and bust was cyclical, not structural, as some had claimed. Indeed, the windfall from the commodity super cycle was consumed. Once China’s trend growth rate slowed, particularly in steel production, infrastructure and real estate, it had a material second order impact on Brazil and exposed the structural weaknesses in the economy.

There are three interesting points to note from a forward looking tactical perspective. First, valuation of the currency is episodic on a fundamental real effective basis. Second, there has actually been a modest improvement in the terms of trade, Brazil’s share of global exports and external position. Third, the key driver of demand for commodity prices – Chinese credit, investment and real estate – has been accelerating. That is also evident in both industrial commodity prices like copper and bulk commodities such as iron ore. It is also evident in the performance of other commodity currencies like the Australian dollar (chart 3). 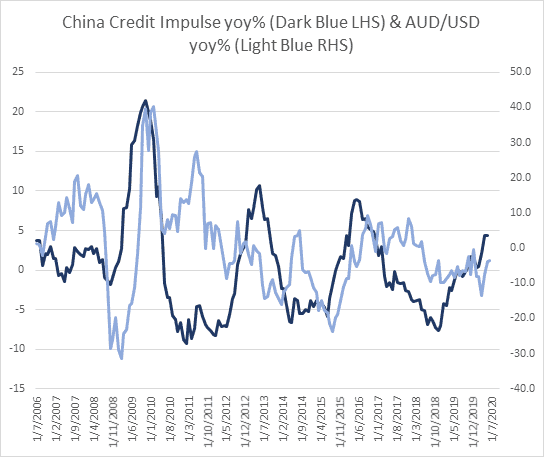 On the negative side, Brazil has been a poster child for how not to manage the current crisis. Like other crises in history it has exposed the structural weaknesses in Brazil’s economy and institutions. On the positive side, (valuation of the currency is episodic. Our only quarrel is that the real yield or risk compensation in both the interest rates and the equity market is modest by Brazilian standards. Therefore, any risk exposure probably ought to be taken in real assets.

In conclusion, Brazil and some of the other commodity linked markets have tactical upside based on the acceleration in credit growth in China. Although it is important to note that each successive credit cycle since 2008 has had a lower peak as China has attempted to moderate excessive leverage and re-orientate the economy toward services. Of course, credit or liquidity is fungible. It will seek the highest return and has also probably been just as important for Chinese internet stocks which are inexpensive relative to US technology peers (chart 4). 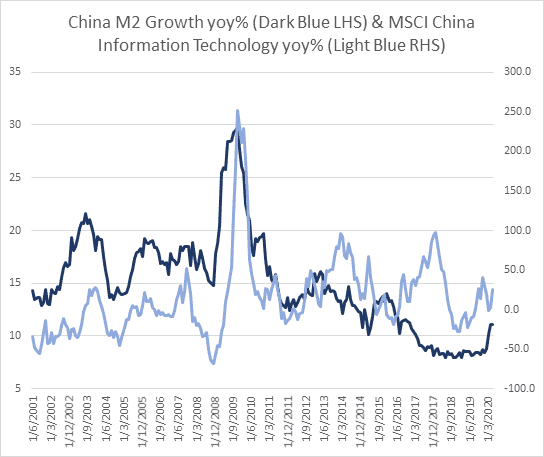