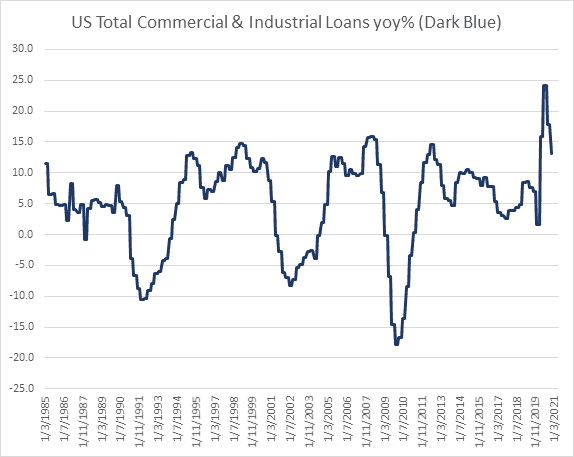 1. The Fed has upgraded its forecasts for growth, employment and inflation at the March FOMC
2. However, the Fed Funds Rate (policy rate) is projected to remain at 0.25% until end 2023
3. The key implication for markets is ongoing accommodation, reflation (positive for equity prices), yield curve steepening and USD weakness
4. As we have noted recently, inflation lags activity and remains low (that will probably limit the magnitude of the rise in yields in the near term)
5. But looking further out, credit growth (transmission mechanism) has been more aggressive in this cycle; and
6. Unprecedented policy stimulus has made the cycle move at warp speed (faster) that prior episodes

The Federal Reserve upgraded its forecast trajectory for growth, employment and inflation at the March FOMC meeting. The revisions imply that both pillars of the dual mandate would be met by the end of 2023. Despite this, the median projection for the Fed Funds Rate is projected to remain unchanged through to the end of that year. In turn, that would imply that the FOMC would be “behind the curve” or inconsistent with their own revised policy framework that would permit inflation to rise above 2% for a period. If the Fed manages to succeed in achieving this goal, the implication for markets is likely to be ongoing reflation, further curve steepening and dollar weakness.

There was a substantial increase to the Fed’s forecast growth trajectory this year, although the upgrade for 2022 was fairly negligible. The aggressive policy stimulus this year is pulling growth forward from the future so there will likely be a greater fade in the fiscal impulse/contribution to growth further out. The labor market projections were also upgraded, with the unemployment rate projected to be below its longer-run (neutral/equilibrium) level by the end of next year, matching the prior cyclical low by the end of 2023. Consistent with those forecasts, the Fed now projects core inflation to be at or above the 2% threshold in each of the next three years.

Crucially for markets, while growth and inflation expectations are higher, they are not enough to cause the Fed to change rates or the level of QE for the foreseeable future (forecast period out to 2023). In the very short term, inflation pressure is more likely to be a function of easy pandemic comparisons and not something that ought to motivate a shift in policy. For markets, this implies that monetary policy will continue to generate excess liquidity, accommodative financial conditions which is positive for equities. The yield curve should also steepen further and the dollar ought to depreciate. Of course, as we noted yesterday, a stronger growth and inflation cycle is a widely held consensus belief among market participants.

The initial equity market reaction – the way price responded to news – was positive, but we do fear that the strong macro cycle is well priced and appreciated in the valuation of some sectors of the market. On the positive side, and as we have noted recently; 1) inflation lags activity by 12-24 months; 2) core inflation remains well below target today; and 3) excess capacity is still large in the labor and some product markets. Nevertheless, the unprecedented policy stimulus in this episode has appeared to make the cycle move at warp speed.

Another key difference in this cycle, highlighted by Russell Napier, was the decision to underwrite the credit markets directly. The implication is that the credit transmission mechanism has been considerably more effective in permitting capital to flow from the banking system into the real economy. In turn, that increases the probability that there might be a secular shift higher in consumer price inflation in contrast to the prior regime when QE asset purchase programs increased bank reserves and asset prices, rather than flowing into the real economy. The time series below shows US industrial and commercial loan growth in January 2021 at its highest level since at least 1985 (chart 1). Increased private sector demand for credit will eventually lead to less bank demand for Treasuries at a time of massive sovereign bond issuance due to expansionary fiscal policy.

This impact might still take some time, but it might be a legitimate cause of a secular turn in consumer price and inflation dynamics over the next few years. If that became the base case, it would have serious implications for asset market and sector returns (more on that to follow). For now, the short term implication of the Fed’s forward guidance is ongoing excess liquidity, a steeper yield curve, dollar weakness and support for equity prices.