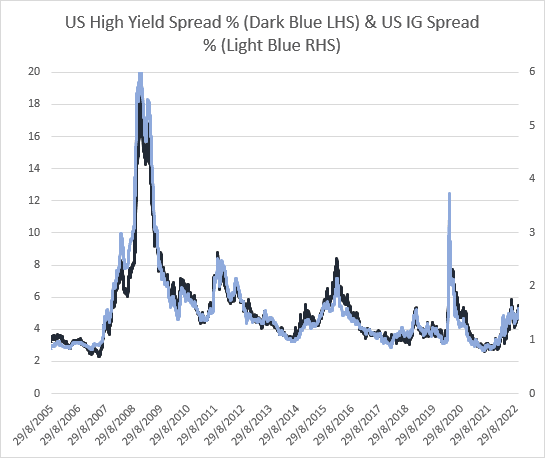 In a 2021 note we discussed the Ouroboros (Greek word meaning tail devourer) as a metaphor for the financial alchemy driving the modern feedback loop between liquidity, leverage and volatility. The Ouroboros is the ancient symbol of a snake consuming its own body in perfect symmetry. In extreme heat a snake, unable to self-regulate its body temperature, will experience an out-of-control spike in its metabolism. In a state of mania, the snake is unable to differentiate its own tail from its prey, and will start to attack itself, self-cannibalizing until it perishes. In nature and markets, when randomness self-organises into perfect symmetry, order becomes the source of chaos (and correlations move to 1).

The feedback loop has its origins in near zero interest rates, central bank asset purchase programs, credit guarantees and forward guidance that lower the value of safe (competing assets) and compress risk and term premium in fixed income, credit and equity. Stated differently, the response to the crisis (extreme policy intervention and liquidity) is also the origin of the next crisis. The compression of risk premium has also contributed to financial engineering (alchemy) that allocates risk based on volatility (value-at-risk). In this self-reflexive feedback loop, volatility can reinforce itself both lower and higher.

For investors, the not-so-subtle point is that an increase in bond market volatility is kryptonite for assets that are naturally short convexity. Historically, phases where fixed income yields rise sharply and rapidly tend to lead to a rise in cross asset volatility, tightening in dollar liquidity and financial conditions as we have experienced this year.

As we often note and consistent with the framework above, if you want to know where the convexity risk is in markets; follow the leverage. In the context of the current bond-market implosion, the Bank of England has taken a crisis-style measure overnight to delay intended Gilt sales and instead has announced bond purchases to smooth the market. Clearly this is in spite of runaway inflation and efforts to hike interest rates.

Put another way, monetizing irresponsible fiscal spending as you raise interest rates to combat inflation is probably not a sustainable or optimal policy mix. As Cam Crise noted, in many ways the policy is like the Bank of Japan’s FX intervention even as it maintains the yield curve control policy. It is probably will not to lead to a permanent reversal in the JPY trend and we should probably take a similar view of the BOE bond buying. Similarly, while there was relief for GBP overnight, even temporary debt monetization during an inflation crisis is not likely to be bullish for Sterling.

The emergency BOE policy action was arguably to stave off distress in the pension fund sector as managers scramble to meet derivative collateral calls. Liability driven investment funds (LDI) have engaged in levered exposure using Gilts as collateral to raise cash in the Repo market, then pledge the Gilts again to raise more cash for more exposure. Clearly that poses a challenge when the value of the collateral collapses leading to forced deleveraging and spill over into other markets. Unfortunately, LDI was an allowable risk by the FCA UK regulator. Therefore, most funds used it as a way to make unfunded liabilities appear funded. The strategy was pushed by the structure creators and backed by the large consultants probably because the “value-at-risk” was perceived as low according to their backward looking models.

For markets, the deterioration in liquidity from higher interest rates and the tightening in financial conditions will likely continue to pressure cross asset volatility. The constraint for central banks in this episode has been inflation relative to the regime over the past decade or more. Hence the emergence policy measures like those taken by the Bank of England are probably not sustainable. In this context, we continue to fear that risk compensation (especially in credit) remains insufficient for the probable hard landing. Both investment grade and high yield spreads are only around average levels relative to history. Stated differently, the cost of protection is still low relative to the potential payoff. While broad market sentiment, especially in equities is rather pessimistic, our sense is that a genuine profit recession is still not adequately priced. However, we might be approaching the capitulation phase.