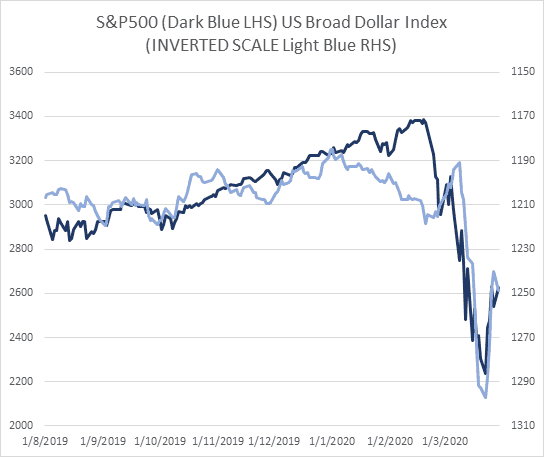 Over the past 3-6 months, the broad US dollar index has had a 80-90% inverse correlation with equities (chart 1). Therefore, it is probably not a surprise that a (tactical) correction in the dollar over the past week has coincided with a recovery in equities. Of course, policymakers, most notably the Fed, are clearly aware of dollar funding pressures that were evident in the FX swap market and simply in the impulsive spot movement in the dollar itself. The Fed’s measures to open FX swap lines with a number of central banks and the announcement of unlimited quantitative easing and the deluge of other support measures last week, were clearly aimed at easing dollar funding pressures. The good news is that the policy efforts have eased some of the demand for dollars. The infusion of dollar liquidity is evident in the compression in cross currency basis. However, funding measures like FRA/OIS remain elevated relative to pre-crisis levels and a range of emerging market currencies are still under considerable pressure. Put differently, the issue is probably not a reflection of bank counterparty risk as it was in 2008, but non-bank risk.

Impulsive, rapid and disorderly dollar strength has often been evident in phases of equity and cross asset volatility more broadly (the second chart below highlights the positive correlation – in trend terms – between the dollar index and equity volatility) . A key reason is that the dollar remains the world’s reserve currency and the base currency for a large number of investors. As we noted last week, a large proportion of offshore liabilities are funded in dollars. The BIS estimates that is around $4.4 trillion which has more than doubled since the last crisis in 2008. Therefore, de-leveraging and liquidation leads to an increased demand for and allocation into dollars. 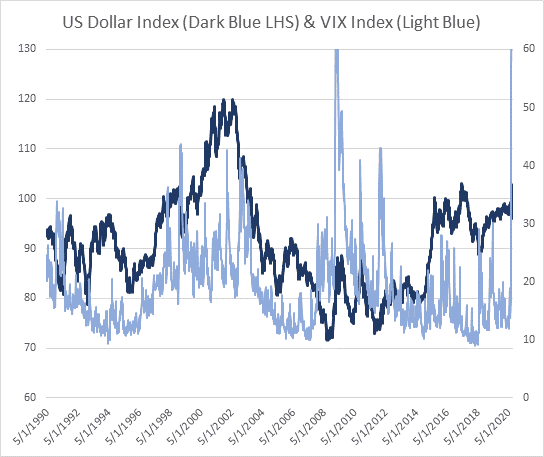 In previous recession or crisis episodes, the US dollar rallied by at least 10%. For example, 12% in 1980, 24% in 1981 and 18% in 2008. The impact on emerging market and commodity currencies in the phases has also been particularly brutal. In 2007, emerging market currencies declined by 22% and commodity currencies by 31%. In the current episode, emerging market currencies have declined by 14% so far based on the JP Morgan index. To be fair, a number of EM currencies had been trading poorly and trending lower relative to the dollar for some time (chart 3). Put another way, the dollar funding or liquidity squeeze merely accentuated the trend already underway. As we have noted over the past few weeks, the COVID-19 episode has been the catalyst to expose leverage and vulnerability in the corporate sector and a range of carry or spread trades. As we noted above, offshore dollar debt is more than double the level it was in 2008. COVID-19 was the catalyst, whereas the cause of the contraction has been the deliberate decision of policymakers to stop economic activity. 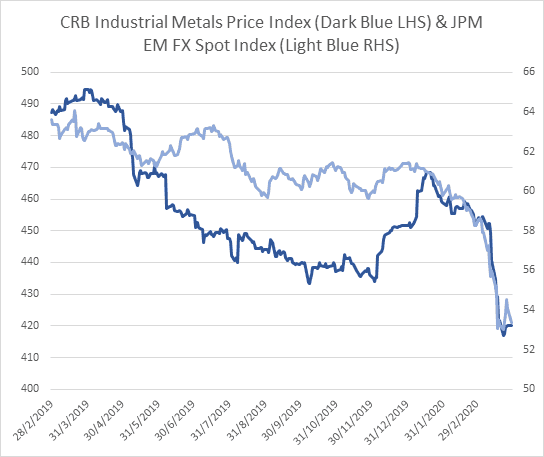 The good news is that policy can also reverse the decline in activity once the shutdown ends. The offsetting policy response has been unprecedented in size, breadth and speed. The Fed’s measures to ease dollar liquidity are evident in the correction in the spot dollar index and funding pressures over the past week. However, some funding measures like FRA/OIS remain elevated. In addition, fragile emerging market currencies and commodities also remain weak. Commodity prices and Chinese equities led developed markets out of the 2008 crisis. Similarly, in this episode it would be bullish if industrial commodities started to rally on a sustained basis and the recent phase of dollar strength eased. It would also likely suggest that an acceleration in Chinese demand and activity was underway. For now, there has been little evidence of a convincing turn in commodity prices, emerging market currencies or Treasury yields.