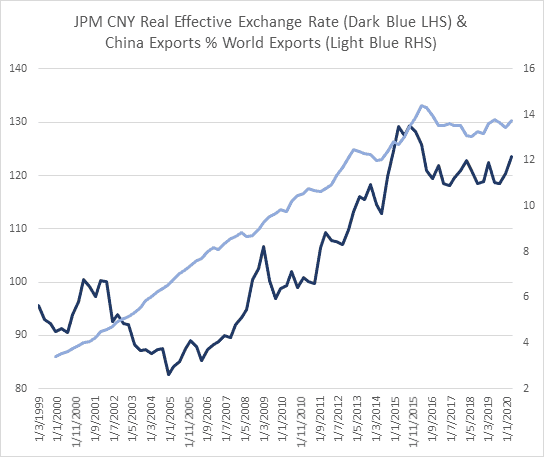 In recent notes we have focussed on the central role of the dollar in global liquidity, cross border capital flows and relative returns between US and non-US assets. A range of factors drive the competitiveness of a currency. In the medium term, a reliable measure and cross check for the fundamental (or real effective) value of a currency is whether a country is gaining or losing market share of world exports. In the short term, cross-border movements of capital can distort fundamentals relative to equilibrium leading to an overshoot or undershoot in currency values. In turn, cross border capital flows, particularly into emerging markets, depend on dollar liquidity, which drives risk perceptions (volatility) and has an influence on leverage. There are a few tactical and strategic points to note.

First, the Fed’s actions and promises have been very successful in providing liquidity to the corporate credit markets. The outcome is particularly remarkable because the corporate credit facility has actually only purchased $1.8 billion. However, the simple promise of Fed intervention has had a positive effect on secondary market liquidity. It has also enabled over $1.2 trillion of investment grade corporate bond issuance or $400 billion more than the previous record through late May. That is, the promise was more powerful than the actual purchases. While these actions relate more directly to credit risk perceptions, corporate funding and equities (chart 1), they have also had an influence on global risk perceptions and the availability of dollar liquidity more broadly. 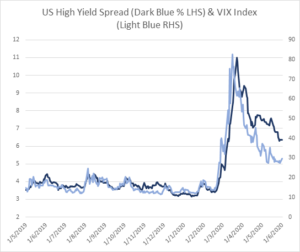 Second, it is probably not a coincidence that the Fed’s aggressive increase in the balance sheet since late March has coincided with a depreciation of the dollar (chart 2). As we noted last week, the Fed has effectively matched or accommodated Treasury issuance or the increased supply of dollars. While emerging market assets and currencies were slow to respond initially, sustained dollar weakness has started to contribute to a stronger rally in emerging market equity. Over the past few years there has been a particularly strong inverse correlation between the dollar index and emerging market equities (chart 3). 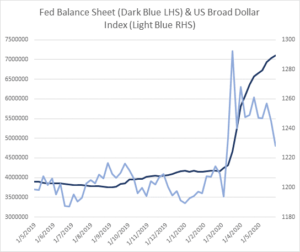 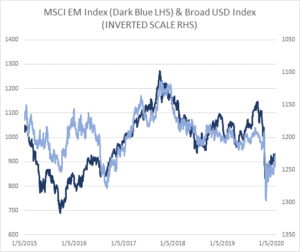 Third, a key tactical risk in the near term is the renewed escalation in tension between the United States and China. While that has not caused immediate or material volatility, it comes after a strong rally in risk assets from the lows, with the S&P500 trading within two P/E points of the 2000 bubble valuation peak (chart 4), and pressure on the Donald’s poll numbers leading into the November election. That opens the door for a potential consolidation in equities in the near term. 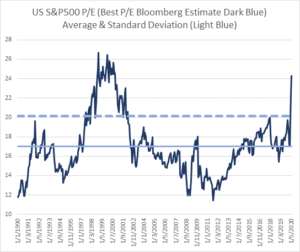 Returning to currencies, the final strategic point to note is that China has actually been losing market share of world exports since around 2015 (chart 5). It was probably not a coincidence that the USD/CNY spot rate reached an inflection point from the regime of steady appreciation to a phase of depreciation since (chart 6). The trend depreciation of the CNY appears warranted by China’s declining market share of world exports and the valuation starting point of the currency. However, as we have noted in the past, currencies are often used as a policy tool. In the current episode, that might lead to a stealth depreciation of the CNY as a competitive weapon in the cold war. At the very least and in conclusion, it could become an additional source of renewed tension and tactical caution on risk assets. 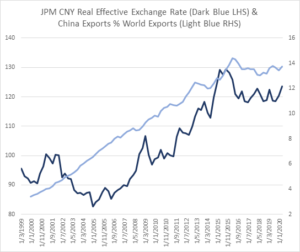 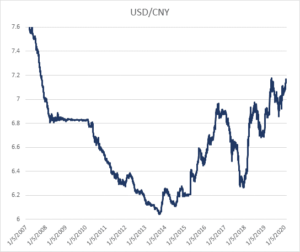