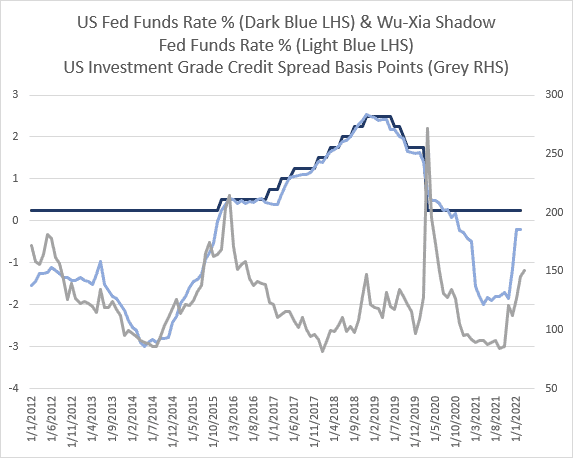 From our perch, it is plausible that markets are experiencing a phase of cognitive dissonance on inflation and policy risk. Cognitive dissonance is the perception of contradictory information that causes stress when two actions or ideas are not psychologically consistent with each other. The prevailing bias appears to be that the conflict in Europe suggests that the Federal Reserve less likely to hike rates, and by implication, that this is bullish for equities.

To be fair, there has already been a material tightening in financial conditions independent of the increase in short-term interest rate expectations and the recent moderation in the QE program. The additional complexity is that market participants might have reached “peak inflation” fear given the recent additional pressure on commodity price inflation from the conflict in Europe.

As we noted earlier this week, geopolitical events tend not to have a lasting impact on global asset prices. However, the current episode has amplified the existing macro challenge of persistent inflation that had already contributed to the recent correction in equities. Put another way, the impact of the conflict was arguably about magnitude, not direction in those assets. The discomfort for the prevailing bias will be if inflation pressure persists and therefore markets have underestimated the magnitude of tightening in this episode.

The magnitude of tightening required in this cycle is also complex. Market participants tend to focus on the Fed Funds Rate or short term interest rate expectations for good reason. However, the Fed also tends to influence broad financial conditions through its actions and promises (communication) and through the balance sheet (or asset purchase program). As we noted recently, researchers at the Atlanta Fed have a model that estimates the impact of QE on the funds rate to determine the “Shadow Rate” or where the policy rate would be adjusted for the impact of the balance sheet. In the previous tightening cycle and again more recently, the implied “shadow rate” was deeply negative. Therefore, once the Fed started to taper the QE program that was a form of tightening.

The road to investment hell is paved with naive overlay charts. Unfortunately we only have one recent episode of tapering (or Quantitative Tightening). However, it is plausible that tapering contributed to a material tightening in financial conditions in the 2018 episode, just as it has led to tightening since late last year (chart 1). It is probably not a coincidence that this has coincided with a phase of US dollar strength and an increase in the credit risk premium. The move in credit spreads also highlights that while policy normalisation is disruptive in the initial phase, higher rates and tighter financial conditions are more challenging for risk assets much later in the macro cycle once rates move above neutral or to “tight” levels.

Two factors concern us about the current cycle. First, if inflation remains persistent, market participants might underestimate the magnitude of the required monetary tightening. Currently, the December 2022 Eurodollar contract is already trading close to an implied yield of around 2% and similar to the 16th contract or a proxy for the neutral (terminal) rate. That is not a particularly aggressive tightening cycle in the context of the highest inflation since 1982. Perversely, if the Fed is too “gentle” in the normalisation process, it could reinforce persistent inflation expectations. That might be bearish, not bullish, for equities.

Second, the performance of some “leading” asset prices, such as the yield curve and the performance of equities sensitive to the profit cycle have traded as though monetary conditions are already “late” cycle and a material slowdown is already underway (chart 2). Our sense is that this observation is probably too pessimistic on the growth and profits outlook. However, it is often a dangerous game to quarrel with those market signals. 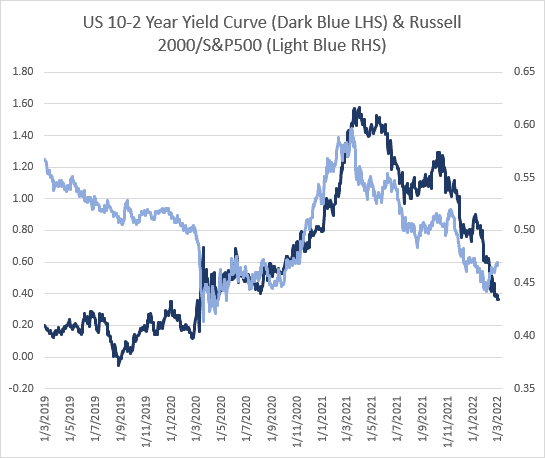 On the positive side, policy and liquidity conditions have eased in this region and Asia already trades at a material discount to history and relative to the United States. The risk for the S&P500 (the global risk proxy) is that if the information on consumer price inflation remains contradictory to monetary policy expectations, that is likely to result in discomfort for market participants and further potential downside in equities.