Bond Markets and the Need for Speed 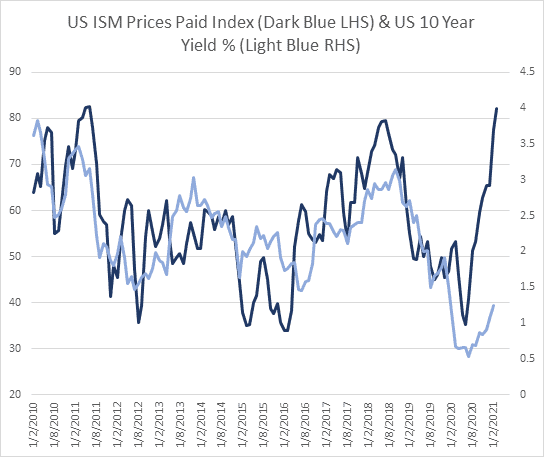 The rise in US Treasuries and sovereign bond yields has started to garner some attention from investors. While the magnitude of the move is modest in the context of the hyperbolic rise in cryptocurrencies or the recent (weather-driven) move in energy prices, a disorderly increase in yields would likely be more disruptive for some risk assets given low risk free rates have been used to rationalize the valuation of cross asset valuations. There are a few important points to note for investors.

First, it matters why yields are rising. An increase in US 10 year yields of at least 100 basis points is typical just before or after the end of a recession or when the global economy is accelerating. The rise in yields so far has been modest in the context of the acceleration in global growth and inflation expectations (as measured by the ISM prices paid survey – chart 1). However, if yields are rising due to an acceleration in real growth expectations that ought to be positive for equities, high yield credit and cyclical (commodity/EM currencies).

Second, there are three unusual aspects to the current episode; 1) the rise in yields started much later than in historic business cycles. That might be due to fear of a double-dip in growth from the virus or it might relate to the ongoing size of central bank asset purchase programs and forward guidance (financial repression and future short rate expectations); 2) EM/Asia local currency yields have also reacted more slowly compared to past sell-offs in US Treasuries; 3) the starting point matters. The trough in yields in 2020 was so low that major developed market bond losses (total returns) are about -2% and already comparable to the 2013 taper tantrum. In that context, the sell off has been material for passive fixed income investors.

Third, speed matters. From our perch, a key reason why the 2013 taper tantrum was disruptive for markets related to the rapid (and emotional) nature of the rise in yields. As we have noted recently, the Federal Reserve was both scared and scarred by the 2013 episode. Jay Powell has already pushed back on the idea of pre-mature withdrawal of liquidity (asset purchases) or shift in policy rate expectations. Nevertheless, the size and breadth of fiscal and monetary stimulus combined with the vaccine facilitating the opening up of the real economy could shift the bond market’s perception of forward looking growth and inflation risk. The good news is that core inflation (as defined by the Fed) remains at 1.4% and well below the 2% target. Of course, the leading indicators of inflation suggest that it might rise to around 2% by the end of 2021 (chart 2). 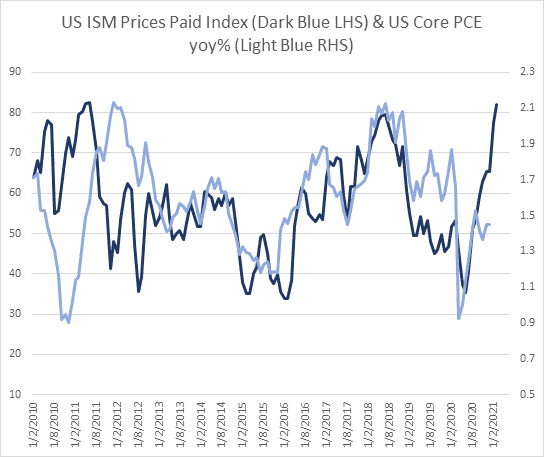 For markets, our sense is that as long as the rise in yields remains gradual rather than rapid, the current level of rates (the risk free competing asset) remains extremely supportive for Asia Pacific equities. According to JPM, EM/Asian markets tend to rise about 60% of the time versus the dollar when the rise in real Treasury yields is moderate (around 25 basis points). In contrast, if the rise is 50 basis points or more (in real terms) that could be disruptive for high yield EM currencies. As we noted above, the low starting point for yields is also a risk in this episode and if there was a more rapid move higher in yields. On the positive side, that would likely be countered by Fed actions and promises (guidance).

From our perch, the best “hedge” against a potential extension of the rise in yields is to hold a basket of “value” equities versus growth for the following reasons; 1) the rise in MSCI World Value/Growth has been modest relative to the rise in Treasury yields (chart 3); 2) the performance of value equities is positively correlated to higher yields; 3) value equities continue to trade at a 74% discount versus “growth” equities compared to a 52% historic average discount. That is the largest discount since at least 1995; 4) a long position in value equities is a “positive carry” expression of a short position in Treasuries and a positive way to gain leverage to the global cyclical recovery. It is a core part of our equity exposure in Asia Pacific. However, as we have noted in the past we also filter for free cash flow and balance sheet strength. We feel those conditional elements are more important than a pure low valuation multiple.