You Should Be Selling When they’re Yellen 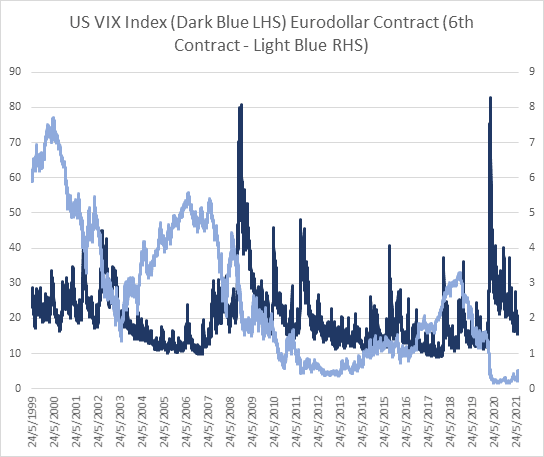 The 2013 taper tantrum had a profound impact on the psyche and behaviour of the Federal Reserve and markets. From our perch, it reinforced the observation that the Fed’s desire to create “stability” eventually leads to even greater instability in once there is a shift in future rate expectations and a withdrawal of liquidity. The prevailing bias that low short rates were a permanent state, encouraged compression in risk premiums and volatility over most of the last decade. The 2013 taper episode was a temporary disruption to that consensus belief. Of course, the Fed’s lesson from the episode was to become even more careful in their forward guidance, thereby exacerbating future risk.

In the current crisis, more than $10 trillion in global central bank liquidity kept bond term premia and credit spreads much more contained than in past crises (relative to the GDP shock). Indeed, the policy action was so successful, high yield credit spreads have compressed back in to 253 basis, below pre-pandemic levels and close to the record trough. Credit spreads (both IG and high yield), financial conditions and the equity P/E ratio imply much stronger risk appetite relative to the period before the 2013 taper episode. Curiously, implied equity volatility is more elevated, while the economy (measured by core inflation and the unemployment rate) is running hotter than the 2013 period. Put another way, on most measures this cycle has moved much more rapidly to mid-cycle conditions, with the exception of short and real rate expectations (the starting point for policy is considerably more accommodative – table 1). 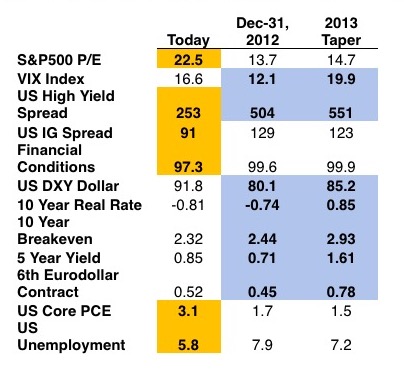 The flattening of the yield curve in the latter part of last week was impulsive, rapid and emotional. While it might signal a shift in future short rate expectations and a material deceleration in growth by Q4 2021, our sense is that was more likely a reversal of crowded positions and correlated beliefs on reflation trades. In any case, investor enthusiasm for “reflation” and “inflation” trades likely peaked in March this year. The good news is that policy conditions remain exceptionally loose and the equity risk premium remains abnormally elevated. Of course, as we noted last week, the key message for markets is that we have probably passed peak policy and liquidity support for markets.

Historically, the most common cause of a disruptive phase in risk asset prices is after the interest rate markets anticipate a rise in future expected short rates (chart 1). For now, you have to squint fairly hard to see the 25bp rise in 6th Eurodollar contract. Typically, a sustained and material shift in short rate expectations is necessary to tighten monetary conditions and contribute to a phase of increased volatility in markets. However, this macro cycle is running hotter and shorter. The unemployment rate is much closer to full employment than it was during the taper tantrum in 2013 and core inflation is already above 3%. Further rapid normalisation in the labour market would likely bring forward future rate hikes and a taper of the Fed’s asset purchase program. 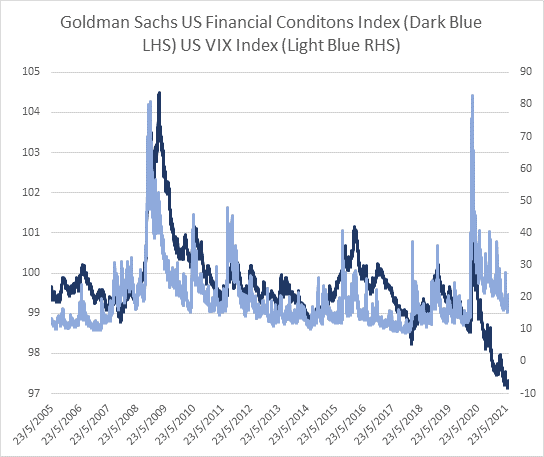 The final point to note is that another measure of risk perceptions is the equity valuation multiple. That has typically been inversely correlated to the real 10 year discount rate. It is probable that the equity multiple (and enthusiasm to re-rate future growth) has also peaked (chart 3). This is consistent with a transition to mid-cycle macro conditions. It also suggests that earnings growth will likely need to do the heavy lifting on returns from here. On the negative side, it implies that the market might be vulnerable to higher real rates (not accompanied by stronger growth). 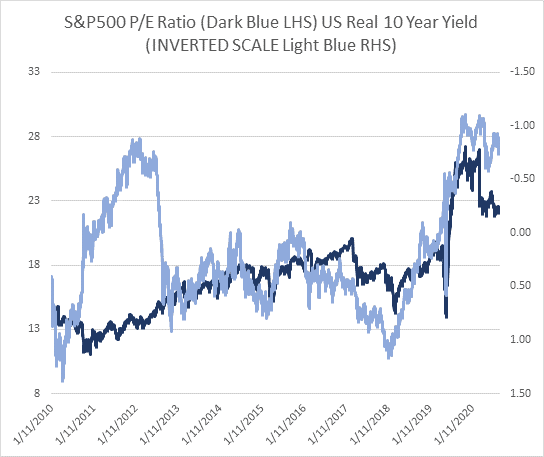 In conclusion, the communication from the Federal Reserve is still very cautious on the removal of policy accommodation at some point in the future. While no one really knows the timing of when the normalisation will start, what we do know is that; 1) policy and liquidity conditions are not likely to get easier from here; and 2) an increased in future short rate expectations would likely cause a disruptive phase of higher volatility. The final point is that the cost of protection is most attractive in credit or the least expensive (in real terms) on record.