Too Much Doom in the Room 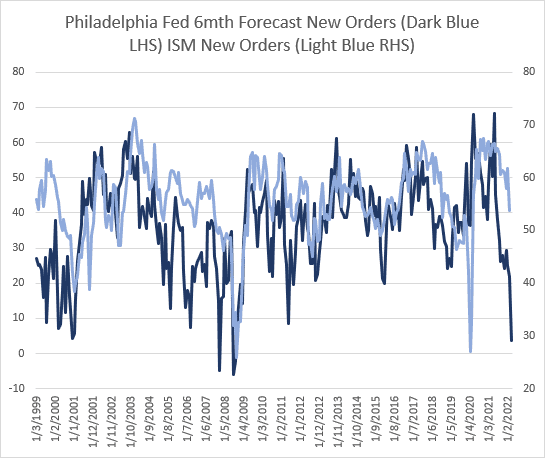 As we often note, a behavioural episode is typically characterised by; a rapid and violent movement in price; focus on a single story; and occasions when price is potentially inconsistent with fundamentals. The first element – rapid price action – helps distinguish something from a cyclical, emotional or short term overreaction and a legitimate fundamental structural problem. The single story is often evident in the mainstream financial media (in the front page news). The last element is a judgement call, but can be assessed by observing price relative to the facts on profits and growth in the context of risk compensation/valuation.

From our perch, the current inflation, policy response and rate episode has become the focus of the single story for market participants or the overwhelming prevailing bias. This week’s Economist Cover is probably confirmation of that observation or consensus belief. The good news for markets is that this suggests that inflation is probably near a peak.

As a corollary, our sense is that short term policy interest rate expectations are also close to being fully priced. The Fed Funds Futures are now pricing around 330 basis points of tightening by the northern summer 2023, with around 180 basis points by this August and 250 basis points by the end of this year. As we have noted in the past, a market implied proxy for the neutral or equilibrium rate is the 16th Eurodollar contract. That is now at an implied yield of 3.07% (chart 1). Stated differently, the fixed income and money markets are now priced for a modest overshoot around a credible terminal rate and might suggest that the nominal 10 year Treasury yield is close to fair value if inflation pressure starts to ease looking forward. 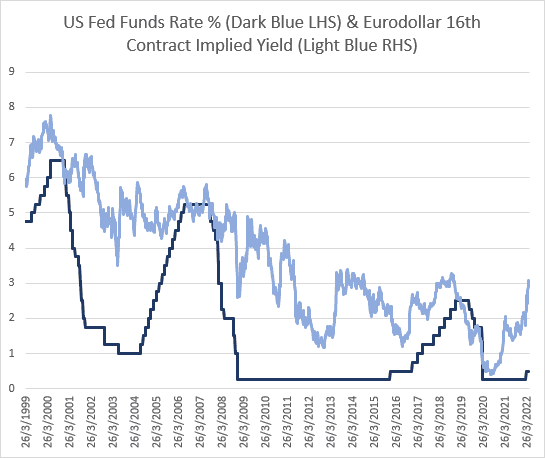 The additional reason to anticipate a peak in yields is the probable deterioration in macro conditions. As we have noted recently, key leading indicators of the growth and profit cycle have started to deteriorate including ISM new orders to inventory, consumer expectations, homebuilder sentiment, the yield curve and the performance of cyclicals versus defensives within the equity market.

An underrated leading indicator of the cycle is the Philadelphia Fed Survey. While the index tends to be more volatile compared to the ISM, it is released earlier in the month and is often a useful warning signal for growth momentum. The 6 month ahead forecast of new orders within the survey is now the lowest since the 2008/2009 episode (chart 2). As we noted above, the index is more volatile than the national survey and focussed on manufacturing. However, taken together with other leading indicators, it is a warning sign for earnings revisions and Treasury yields (lower).

The challenge for equities, particularly stocks sensitive to the cycle is that the Fed is potentially hiking rates aggressively into a slowing growth environment where some of the supply constraints contributing to inflation have not been resolved. In conclusion, while the inflation and policy tightening episode is now well priced into fixed income, the consequence for growth and profits is still yet to be fully reflected in equity prices. Perversely, there is probably too much doom priced in fixed income and not enough in equity. Within equity, this suggests maintaining and defensive bias.