There’s a (Bond) Bear in There 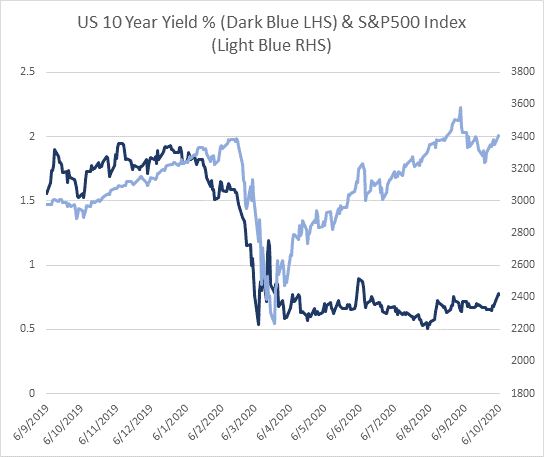 While some analysts including Andrew Sheets at Morgan Stanley have argued that this cycle has been surprisingly normal in terms of how the global growth data have evolved and how many risk assets have responded, from our perch the key difference has been the absence of a rise in long end Treasury yields. As we noted back in August, the experience of the Japanese market over the past few decades suggests that sustained high stock prices and low bond yields are incompatible in a regime of genuine deflation (zero rates and low nominal growth). However, they can coexist when low rates reflect early and sizable monetary easing, low inflation and reasonable expectations of a growth and earnings recovery. Stated differently, if reflation ultimately prevails, Treasury yields ought to eventually rise and assets levered to the cycle should outperform. The divergence between the S&P500 and other reflationary assets ought to close in a positive way, with Treasury yields rising for the right reasons, however, the timeframe might remain frustratingly slow (for bond bears).

To be fair, a key reason why long end yields have remained well anchored is that future short rate expectations are likely to remain near zero until at least 2022. The fair value of a 10 year Treasury is the future expected policy rate plus a risk premium for future inflation, liquidity and term to maturity. If shorter dated yields will remain near zero over a decent proportion of the life of a bond, that will lower the equilibrium yield. There are two forward looking points to note.

First, the key near term risk for markets is the outlook for fiscal policy. Failure to extend the fiscal support measures or a large reversal in the fiscal impulse (it is the change in fiscal policy that contributes to growth) is the major risk to the expansion over the coming quarters. While central bank liquidity and credit support has been dramatic, our sense is that sustained fiscal easing backed-stopped by monetary policy is essential to underpinning the cycle, broadening the recovery into the lagging sectors and ensuring the rotation from growth (or liquidity beneficiaries) into “value” sectors of the equity market. The good news is that key macro data has been consistent with this rotation and a rise in Treasury yields. While the ISM manufacturing and non-manufacturing (services) is a survey, it has historically been a fairly reliable coincident indicator of the growth, profit cycle and the trend moves in Treasury yields (chart 2).

Second, another key risk to long end Treasury yields is inflation. As we noted a few weeks ago, our sense is that this is more likely to be a 2022 issue than a near term risk. The 2020 recession has affected both supply and demand, but in net terms the entire episode has been overwhelmingly deflationary. Clearly there has been some asset and commodity price inflation. Moreover, inflation as the Federal Reserve measures it (the core PCE) will rebound next year due to the low 2020 base. But beyond the base effects, the recession has created considerable excess capacity, most notably in the labor market, that will take several quarters to clear. In the last three recessions, core consumer price inflation continued to fall, while ever the unemployment rate was higher than year ago levels. From a timing perspective, this suggests that core inflation should remain below targets acceptable to policymakers and not disruptive to financial markets for at least another two to three quarters.

In conclusion, the recent price action in the Treasury market has been notable in the context of how stable yields have been so far in this expansion. The divergence with the S&P500 and other reflationary assets makes sense in the context of low future expected policy rates and the probability of near term inflation risk. However, the growth and earnings recovery needs to be sustained. That probably requires sustained fiscal easing backed by monetary policy. The good news is that the way markets have traded over the past 48 hours suggests that the odds of greater certainty in Washington has increased. It also suggests that the September pull-back was “corrective” rather than the start of another major drawdown. Whether stimulus is led by fiscal or monetary policy will also likely matter for the path of Treasury yields and the relative performance of “growth” versus “value” equity.