There’s a Bear in There 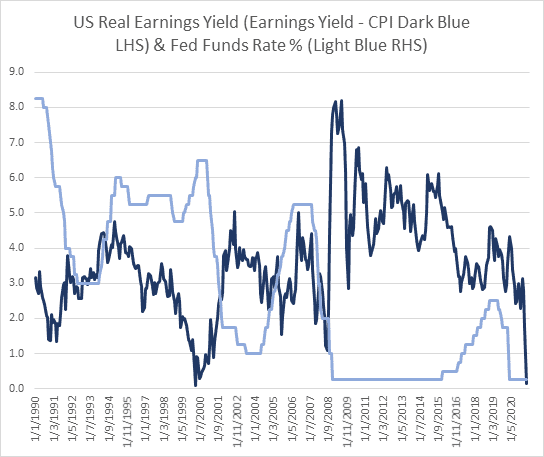 Something that has garnered attention recently has been the decline in the real (headline CPI adjusted) US earnings yield. Based on the forward earnings yield less the headline CPI, the real yield is now zero. However, if we use the current trailing earnings yield (1/29 = 3.4% – 4.2%) the real yield is now negative by 80 basis points. In the previous two episodes when the real earnings yield approached zero (or turned negative on a trailing basis) the market experienced the major drawdowns 2000 and 2008. While we are sympathetic to the observation that US equities are not cheap on an inflation-adjusted basis there are a couple of important differences in the current cycle.

First, policy remains exceptionally loose (official interest rates, monetary conditions and fiscal policy) in the current cycle. By contrast, the Fed Funds rate was raised to 6.5% in 2000 (just after the equity market peak) and 5.25% by mid-2006 in that episode (chart 1). In the current cycle, policy rates remain at 0.25% and the Fed balance sheet has been increased to $8 trillion. While excess liquidity peaked in Q1 2021, it remains extremely accommodative relative to past cycles. The big picture point is that the discount rate environment today is very different to the policy conditions that contributed to the market corrections in the prior two episodes. It is potentially consistent with a further “blow-off” top in liquidity beneficiaries or mega-cap technology stocks. To be fair, the rise in the real Fed Funds Rate to 1% in 2018, was enough to cause a non-trivial decline in risk assets.

Second, a related point to note is the stage of the cycle. The peak in policy rates (and the discount rate) in the 2000 and 2006 episodes also coincided with late cycle economic and market conditions. While the current cycle has moved at warp speed relative to previous episodes, the output gap is still close to mid-cycle macro conditions. The recovery in the US labour market has been rapid from the peak in unemployment last year. However, total employment is still 8 million jobs below peak and the unemployment rate is still above 6% (versus a trough of 3.5% prior to the crisis – chart 2). 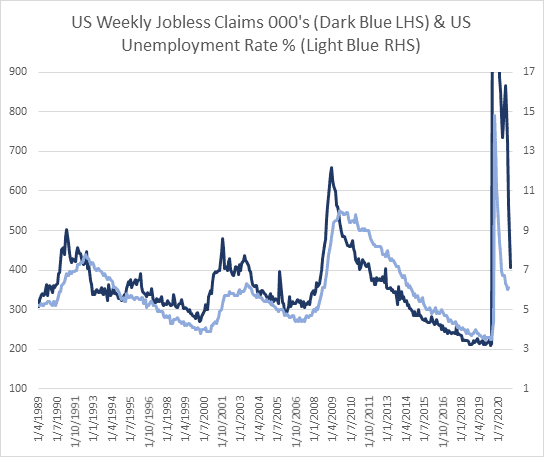 The key point for markets, is that equities tend to outperform until the output gap closes. That is not likely until next year. That said, macro conditions become more challenging as the cycle matures and transitions to mid-expansion conditions. That is a key reason we have rotated back into consumer staples and have a preference for companies with high free cash flow, low balance sheet leverage and dividend yield (shorter duration companies). We also continue to hold some secular growth (Asian technology) given still favourable valuation, cash flows, balance sheets and the discount rate environment compared to historical episodes.

The additional positive point to note is that there has been a consolidation in both nominal Treasury yields and inflation expectations over the past few weeks (chart 3). In turn, that has coincided with a consolidation in “cyclical” equity outperformance relative to defensives. The rise in breakeven inflation expectations has been incredible from the pandemic low and consistent with the performance of cyclical assets. While the level of nominal yields remains low compared to previous cycles, that likely reflects the extremely low starting point in this cycle, the magnitude of the rise from the trough and central bank anchoring of future expected short rates. Nevertheless, the recent consolidation in Treasury yields and pro-cyclical assets is probably just that – a consolidation before a further advance as the expansion continues. While excess liquidity probably peaked in Q1 2021, policy conditions remain exceptionally loose and will continue to support equities relative to fixed income. 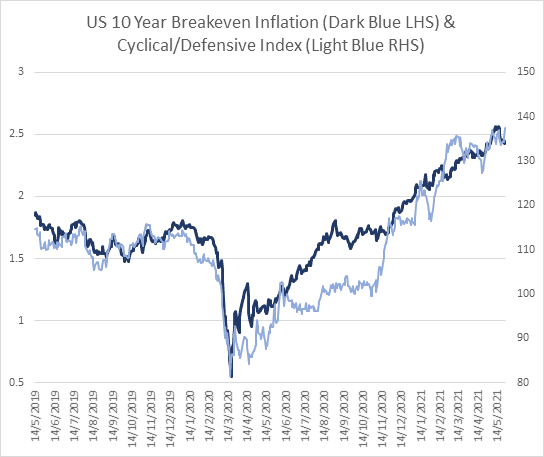 Although it is difficult to defend policy conditions at emergency levels, the Fed was both scared and scarred by the taper episode in 2013. As a result they will likely be cautious in removing excess liquidity after the pandemic crisis. As we noted above, the level of interest rates today is very different from the policy rates at the peak in 2000 and 2008. As a result, we would not be surprised to see a “blow off” rally in equities, particularly liquidity beneficiaries before this cycle ends.