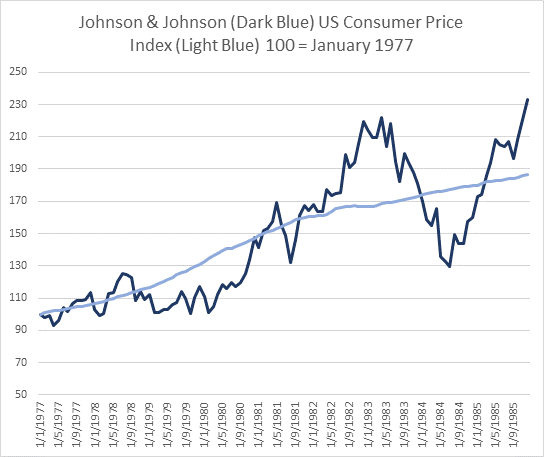 Following a rapid and emotional liquidation on Wednesday, there has been a solid recovery in the liquidity beneficiaries over the past 24 hours. As we noted yesterday, it is plausible that there has been a (tactical) peak in goods and commodity price inflation expectations. However, it is also our sense that the conditions for a secular rise in broad consumer prices is also now in place. That will likely occur over time as the labour market tightens and underlying wage pressure builds. Eventually it will probably lead to higher interest rate expectations (the discount rate) a reduction in excess liquidity and downward pressure on the liquidity beneficiaries and long duration “growth” assets as the economic cycle matures.

From our perch, one of the key challenges with assets that don’t produce any cash flow is that they don’t have a definable valuation anchor. Stated differently, Bitcoin’s value (or the value of non-profitable companies) will rise and fall depending on what people believe they are worth. This is sometimes referred to as the “Tinkerbell Effect” – a recognized economic term based on Peter Pan’s assertion that Tinkerbell existed simply because children believed she existed. While there may end up being genuine value or a legitimate purpose for crypto or related companies in the innovation sector, much of the perceived value is derived from hopes and dreams. There are very few companies that were trading at greater than 10 times sales in 2000 that are still operating today. Amazon is a notable exception. It is highly implausible that all 60+ listed companies trading at greater than 10 times sales will survive looking forward.

In contrast, a sector that has proved to be resilient in high trend inflation regimes is consumer staples. The times series below highlights that Johnson & Johnson (as a proxy for the consumer staples sector) matched inflation (in price terms) over the high inflation regime in the 1970s and early 1980s (the returns would have been even stronger on a total return or dividend adjusted basis). Of course, the key reason why consumer staples can beat inflation is that they tend to have pricing power and can pass on higher input costs to end consumers to maintain profit margins. Staples also tend to be high cash-on-cash return businesses.

In Asia, the consumer staples sector has achieved above average returns on equity relative to the broad index over time. However, for that reason it has also tended to trade at a hefty 90% premium on average since 2005 (chart 2). In addition to the above average returns on equity, consumer staples have lower net debt or superior balance sheets (less than 1 times net debt/EBITDA for the sector in aggregate and half the broad index). 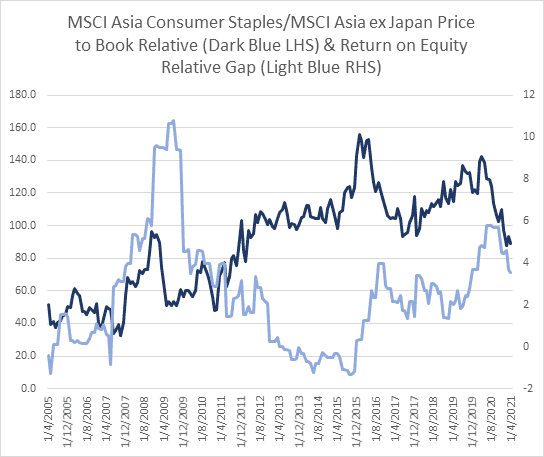 Tactically, Asian consumer staples have underperformed cyclical sectors such as materials by a considerable (40%) margin from the trough last year (chart 3). The premium of consumer staples has narrowed from 160% in 2015 to 89% today. Staples were particularly expensive after the last crisis – peaking in 2015 – when there was a strong demand for perceived of cash flow and returns or volatility aversion. On the positive side, Asian consumer staples also have 3.5% points higher return on equity relative to the broad market. The superior returns on equity have generally been consistent over time, albeit less than the premium multiple investors have been willing to pay. Put another way, investors have paid a premium for superior returns, stability of returns and balance sheets. However, our big picture point is that staples may be more defensive in a rising trend inflation environment. We may look to rotate some of our cyclical exposure into staples over the coming days. 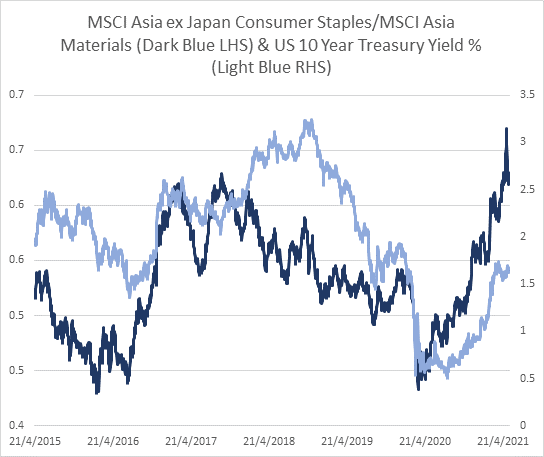