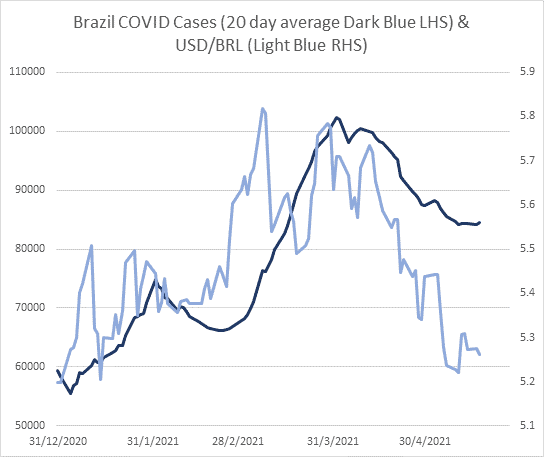 As we often note, currencies are always a relative price. The focus over the past few days has been on the renewed weakness in the US dollar trade weighted index to new lows. However, from our perch, the recent wave of dollar selling has been driven less by domestic data and more by the relative trajectory of COVID amelioration and opening up (macro momentum) outside the United States. In Europe, for example, rolling COVD cases are now down to the lowest level since last October. Similarly, in some of the more challenged countries like Brazil the improvement in cases has coincided with a recovery in spot FX versus the US dollar (chart 1). While COVID developments are unlikely to have a lasting impact on currencies over the medium term, the big picture point is that it has been a relative influence on macro and policy developments and therefore relative growth and asset return expectations.

In the medium term, the outlook for the US dollar is more complex. While the breakdown in price might motivate momentum orientated traders to sell more dollars, judging by positioning data, short dollar positions are a quite extended and a consensus belief. To be fair, the Fed’s policy and liquidity provision since the start of the crisis has been more dovish than most other central banks. The dollar also tends to depreciate in a global expansion phase as risk perceptions improve and risk premia compress. The US dollar obviously moves inversely to Asian currencies and assets (chart 2). Of course, the more aggressive fiscal and monetary response from the US also suggests that the recovery in US growth and asset returns might be superior as well. That might start to support the dollar from a tactical perspective over the coming months. 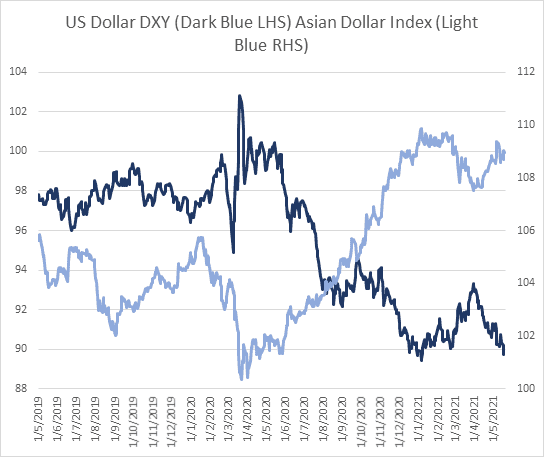 Looking forward, our sense is that the hurdle for Fed policy normalization is still extremely high relative to the prevailing bias. We do not anticipate any “taper” of the asset purchase program before year end. However, if there was an earlier than anticipated moderation in the Fed’s balance sheet and liquidity it would be a potential catalyst for a renewed phase of dollar strength. In the medium term, the dollar remains around 15% overvalued on a real effective basis and given the large domestic and external deficits. However, that is also the dollar’s greatest strength as growth and returns on dollar assets are likely to improve more rapidly as a result of the aggressive policy response. Chris Colman in our team is also concerned about the absence of domestic growth drivers in Asia Pacific compared to markets that are opening up, if policymakers persist with rolling lockdowns and eradication of the virus.

In the medium term, the fundamental development that probably matters most for a currency is the terms-of-trade (export prices relative to import prices) and whether a country is gaining or losing export market share. From our perch, emerging market currency valuations appear materially undervalued on this basis in aggregate. Moreover, select emerging currencies (like IDR) have positive real interest rate carry relative to the major currencies. Moreover, what matters for exporters or companies in many emerging countries that derive most of their profits from offshore is the terms of trade (it is a proxy for national income). The recent strength in commodity prices suggests that both the Brazilian Real and Brazilian equities are materially undervalued relative to Brazil’s terms of trade (chart 3). Brazilian equities also trade at less than 10 times forward earnings. The divergence appears episodic and probably exacerbated by the emotional response to the COVID episode. The divergence is also apparent in other commodity linked markets, albeit less extreme. 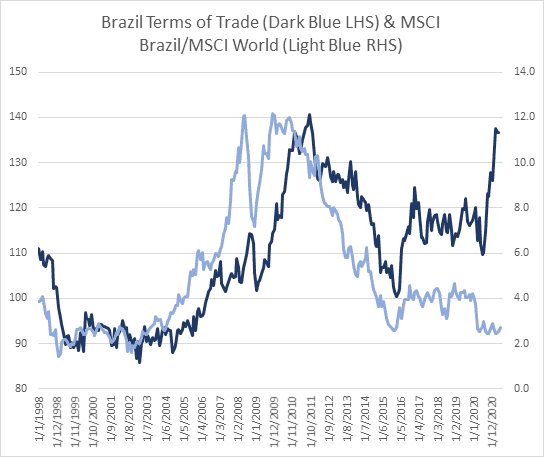