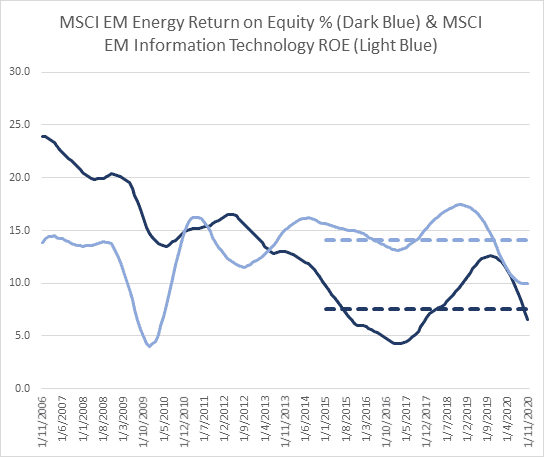 If the global expansion is sustainable, synchronous and supported by policy in 2021 “value” sectors of the world equity markets have a decent probability of out-performing “growth, momentum or low volatility” factors in a tactical sense next year. The historical experience from past cycles suggests that the expansion ought to continue as the cyclical tailwinds following a recession are powerful. However, as we cautioned last week, cyclical acceleration supported by policy and the vaccine roll out are now required by markets given what has already been priced. Any disappointment on either front could lead to a 2010-style consolidation or correction. On the positive side, the cycle usually wins.

From our perch, the most compelling “value” sector if the expansion remains robust in 2021 is Asia Pacific banks. That sector trades at 75% of book value, an 18% 12 month forward cash flow yield and 11% trend return on equity. We also like the Asian technology sector as a barbell to Asian banks for cyclical exposure and secular growth. Trend return on equity is high, balance sheet leverage is low and free cash flow is attractive in an EM and global context. In contrast, the least compelling value sector is energy (chart 1). We have the following concerns.

Second, the forward cash flow yield does not appear to be attractive enough given the sector’s challenged growth outlook and ESG headwinds. Other disrupted sectors like tobacco and coal (25%) offer much higher free cash flow yields. The point here is that the energy sector is not trading at a particularly distressed or episodic valuation compared to coal, mining and materials. We would also note that trend return on equity (profitability) in the MSCI EM energy sector has been well below the MSCI EM Information Technology sector over the past 5 years (chart 1). Interestingly, even the battery, lithium and renewable energy sector trade at more attractive forward free cash flow yields (around 12%).

Third, the energy sector is challenged by long term disruption factors; 1) peak oil demand; 2) electric vehicles, hydrogen; and 3) plastics recycling. Under BP’s base case oil demand will likely peak in the early 2020’s. The IEA estimates that oil demand by 2040 needs to by 67 million barrels per day to meet the Paris Climate targets. On electric vehicles, more than 45% of oil demand is transport related. The greatest threat to long term oil demand is the electric vehicle and reduction in combustion engines. Hydrogen could also become a viable alternative for large forms of transport according to an EU study released in June this year. While road transport accounted for around 60% of oil demand growth over the last decade, petrochemicals will account for about 60% in the next decade according to the IEA. However, that demand could decline if there is an increase in plastics recycling from EU policies such as taxes and bans on plastic straws. The final point to note is that the ongoing shift to ESG might see the energy sector banned. For example, the Norwegian government has recommended the Norges Bank reduce its holding in oil and gas stocks.

The good news from a cyclical perspective is that oil demand tends to rise in an expansion phase. The US ISM manufacturing index is consistent with around $55-60 next year (chart 2). Over the past 40 years (post 1980) the oil price has averaged around $63 in real terms (or today’s USD) that would imply some cyclical upside. However, the long term real price was considerably lower in the pre-1980 peace-time period. While it is important not to make cyclical arguments with structural factors, the secular challenges above have accelerated over the past few years and technology has brough down the breakeven costs, particularly in shale (which is much more rapid to respond to high prices and around 10% of global crude production. 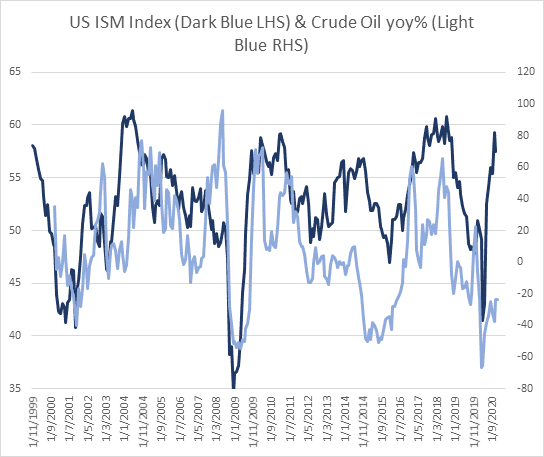 In conclusion, the energy is not expensive relative to the broad market, but is not as episodic as other distressed or value sectors like Asia Pacific banks or materials. The cyclical demand for oil should improve as the global economy recovers next year, but structural factors might cap the mean reversion in returns on the energy sector.