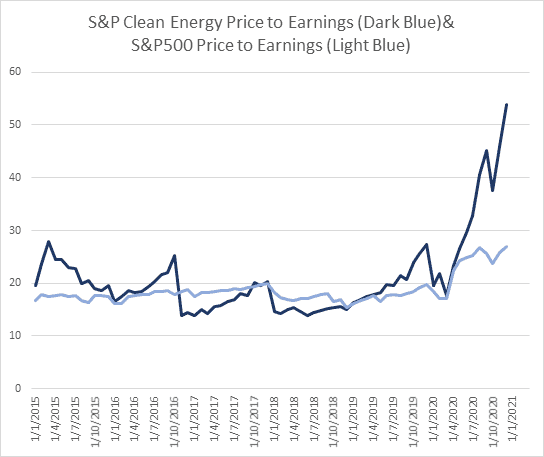 A key potential implication of the mini Blue Wave that has the Democrats controlling the House, Senate and the White House is that the Administration will put-forward friendly clean energy industry legislation. Of course, this was rapidly priced (extrapolated) by the investors. The S&P Clean Energy Index is +66% since the November election +179% over the past year. There are a few key points to note.

First, there is little doubt that the Biden Administration will attempt to further the interests of clean energy, something that we strongly support from a philosophical point of view. However, it remains to be seen whether there will be some sort of Green New Deal. The reason that we described the election result as a mini Blue Wave is because the majority in the House and Senate are razor thin and it assumes that members of the party vote consistently across party lines. For example, Joe Manchin of West Virginia is likely to be a key swing voter in the Senate. Expecting a representative of a huge coal-producing state to vote for its obsolescence is probably optimistic.

Still, if history (or at least Tesla) has taught us anything, it is that the market can enthusiastically extrapolate themes with sufficient momentum and some economic rationale. To be fair, the transition away from fossil fuels to clean energy is not a pure economic cost/benefit analysis in the traditional sense. It is externalities of pollution and climate change that is driving the shift toward green energy.

Nevertheless, the price you pay for an investment still matters for your future return. Generally it pays to buy an asset cheap. It is true that the S&P Clean Energy Index trades at 53 times earnings or roughly 2 times the valuation multiple of the S&P500 (chart 1). On the positive side, most of the multiple expansion has occurred over the past two months and the valuation is still a modest discount to the mega-cap (FANG) stocks. It is also possible to argue that there is more future potential secular growth in clean energy than there is in social media and smart phones. To be fair to the mega cap technology companies are stronger on balance sheet leverage and cash flow metrics. The major technology companies are net cash on balance sheet and have considerable monopoly-like power or market share (no longer an obvious regulatory threat under the new US administration).

In conclusion, the green energy sector has merit from a secular investment, social and philosophical point of view. However, we are always cautious on an asset that trades on heroic valuations after a phase of euphoric, non-linear and emotional price action. It is also important to note that while the Democrats control Congress, the margin is razor thin. Therefore, a major Green New Deal might be challenging to pass without some concessions. It is also important to note that the sector is still trading around 40% below peak levels early in the new decade attained during the oil boom years (chart 2). We would be reluctant to allocate aggressively to the sector in the very near term. Like other “growth” sectors of the market, clean energy might also be challenged by higher yields (a higher discount rate) in the near term. 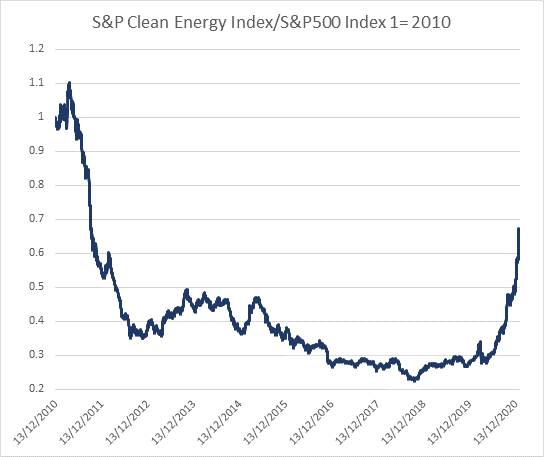