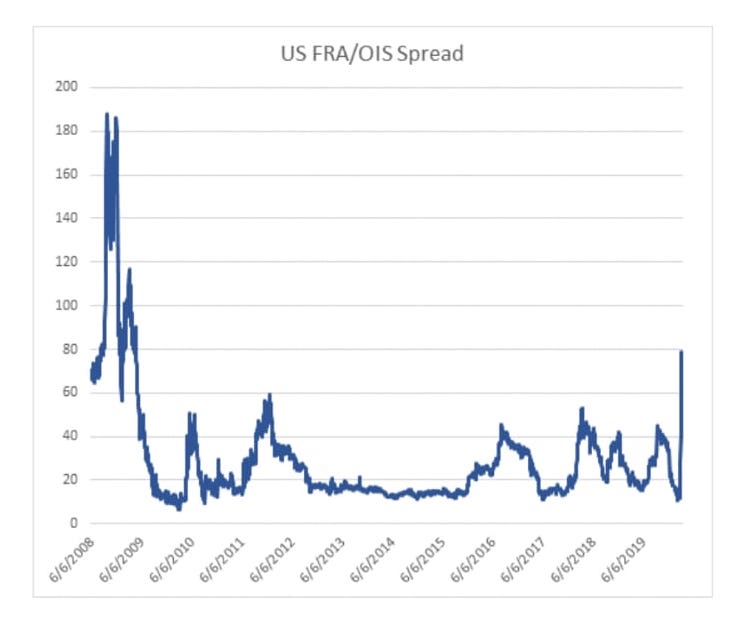 The Federal Reserve has cut the Funds rate by 100 basis points to near zero this morning in Asia and has also pledged to buy at least $700 billion. In addition, it announced several other actions, including letting banks borrow from the discount window for as long as 90 days. The Fed also united with five other central banks to ensure dollars are available around the world via swap lines. The last action was very important in our view. As we noted late last week, the increase in FRA/OIS (chart 1) and cross currency basis spreads late last week indicated that global dollar liquidity was tight. That has probably contributed to dollar strength and the pressure to de-lever more broadly and on risk assets.

While the actions from the Fed are definitely necessary and welcome, a point we made last week is that this crisis is not one related to liquidity in the banking system. If it was, the Fed Repos last week would have had a greater take up. Rather, this is a corporate credit or balance sheet crisis caused by the sudden stop in global activity, with the knock-on effect to corporate cash flow and profits. Of course, the challenge for companies (both large and small) is not only that revenue and cash flow has fallen sharply, but the access to funding markets has tightened materially. That is a key reason why a number of companies started to tap bank credit lines last week. Put another way, the central banks and governments should not only focus on the corporate paper markets but long term credit markets to support the corporate sector. Unfortunately the Fed did not open the possibility of purchasing corporate bonds (constrained by their mandate). The larger problem for financial markets is that the market structure and liquidity is also a material risk for corporate credit. It is considerably more difficult for banks to provide sufficient liquidity between buyers and sellers following changes after the last crisis.

The big picture point is that although the Fed action is welcome and necessary, it is not obvious that cheaper access to credit will be enough to stabilise equity and credit markets given the sudden stop in activity and corporate cash flow. The balance sheet is suddenly king again or the ability to preserve the return of capital as opposed to the return on capital. As we and others have noted, the key response has to come from the fiscal authorities via measures to support the public health system and provide direct cash flow to companies and households most affected by the collapse in cash flow. Policy is moving in the right direction. Even the German government is considering a fiscal response. However, the question is whether they act quickly and boldly enough to offset the sudden stop in activity and cash flow. The Fed’s actions were also necessary because it might take the US Congress longer to act than the markets would like. The way price responded to news; limit down in the US equity futures, might be telling. Then again, if they did not act, the dollar funding crisis might have been considerably more dire. We remain defensively positioned.