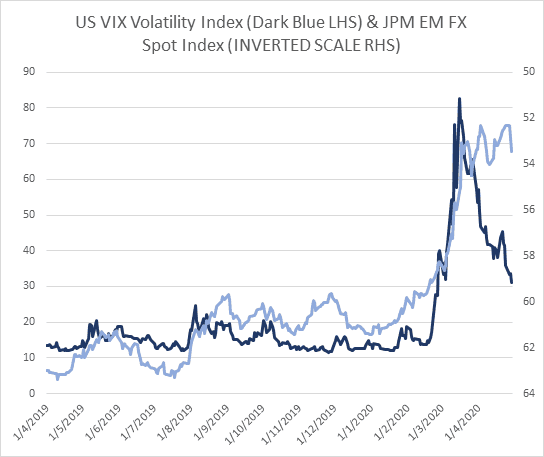 A few weeks ago we noted that the rebound in emerging market currencies has been very modest relative to the “V-Shaped” recovery priced into US equities. That is true on both a spot currency basis and in terms of the risk premia or carry relative to developed market sovereign yields or equity volatility (chart 1). The JP Morgan Emerging Market currency index is only up 1.2% over the past month compared to the 20% for US equities (it is obviously more from the March 23 low).

On the positive side, the emerging market currency index does appear to have formed a (tentative) low in April following a re-test of the trough in late March. The modest turn around in emerging market currencies also appears to be consistent with the peak in the broad dollar index that coincided with the Federal Reserve’s “unlimited QE” and various programs to provide liquidity and ease credit conditions, particularly the FX swap lines for select countries.

Of course, a plausible reason for the lag in a number of EM currencies was that the swap lines and therefore easier access to dollar liquidity was not available to all countries. To be fair, the IMF, World Bank, G20 and the Paris Club also acted swiftly to provide access to loan facilities and debt suspension for a number of emerging currencies. However, a key observation on the access to dollar liquidity, is that differentiation in emerging market currencies probably remains important. Not all carry is created equal.

An additional point to note, that we have emphasized in the past, is that there are two key drivers for emerging market currencies. First, as we noted above, the US dollar and the availability of dollar liquidity. Similar to other asset classes, there is an intimate link between available liquidity, leverage and volatility. When liquidity is plentiful, that tends to supress volatility and sovereign yields making the relative carry in emerging markets attractive. At the same time it also encourages leverage, in terms of the borrowers or debtor countries and investors allocating capital to the carry trades. Put differently, the value at risk models permit more capital to be allocated to carry when volatility is low, leading to a self-reinforcing or reflexive feedback loop between available liquidity, volatility and leverage. Of course, that gets disrupted when there is a withdrawal or shortage of dollar liquidity and rise in dollar rates, for whatever reason. 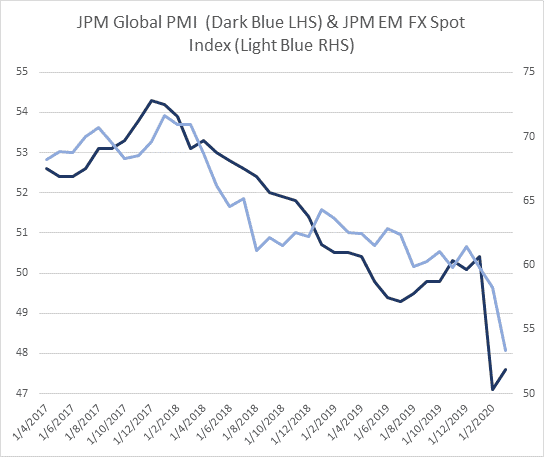 In conclusion, the good news is that the emerging market currency index appears to have formed a base in pure price terms. Carry or risk compensation in a range of markets is attractive and the measures taken by the Federal Reserve, IMF and others clearly have had a positive impact on dollar liquidity and funding spreads. However, differentiation also likely remains important. Not all carry remains equal. The relative weakness in emerging currencies might also be a better reflection of the fragile nature of global final demand. On the positive side, most emerging market currencies are trading at comparable real effective valuations to the Asian crisis in 1997, with a considerably stronger share of world exports and better balance of payments. We have remained cautious and selective with a focus on the cross rates that have high yields and strong economic linkages such as CNH/TWD. Although some of the spicier cross rates such as EUR/MXN are starting to look attractive.