The EM Barbell and the Case for Asian Technology 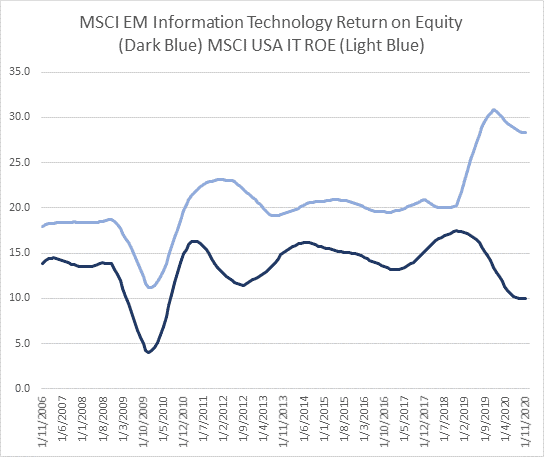 Our sense is that long EM equities (and short the US dollar) has become a widely held consensus belief. On the positive side, following a decade of underperformance, the secular outlook for emerging (Asian) equites appears very appealing. In relative price, valuation and positioning terms EM/Asia is back to 2003 just after the SARS pandemic and not far above Asian crisis revulsion levels. From a cyclical perspective, a sustainable, synchronized recovery supported by the Fed is likely to be bearish for the dollar and bullish for EM/Asia. However, as we noted above, that has become the prevailing bias.

Within EM/Asian equities we like the barbell of “value” (Asian banks) and secular “growth” (Asian technology). As we discussed last week, banks in Asia Pacific trade at an 80% discount to US equities, 75% of book value, with 11% trend return on equity and a 4% sustainable dividend yield. Banks have operating leverage to the cyclical recovery (higher yields/higher net interest margins) and secular leverage to rising credit penetration in emerging Asia. In contrast, Asian technology has some exposure to secular growth in e-commerce, internet, 5G and the stocks that have benefited from the existing low discount rate regime (if that persists).

To be fair, the MSCI EM (Asia) Information Technology sector is also cyclical. A number of the stocks within the basket have direct or indirect exposure to semiconductors (and the supply chain). Prices in that sub-sector tend to accelerate and decelerate with demand for memory chips and therefore with the global manufacturing cycle. The time series below highlights the correlation between the US manufacturing ISM (dark blue), the US semiconductor index (light blue) and MSCI EM Information Technology (grey) on a year over year basis. In that sense, the EM/Asian technology sector is more commodity-like or cyclical in terms of demand, inventory cycle, margins and prices. A near term tactical risk is that the demand for technology components and DRAM prices might be near a cyclical peak. 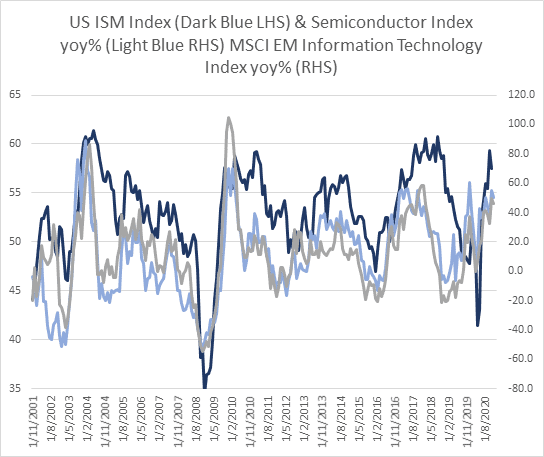 The cyclical nature of the EM/Asia technology sector in outright terms and relative to the US is also evident in return on equity (or profitability – chart 2). Not only has US technology had superior trend return on equity since 2005 compared to EM/Asia, the latter has been considerably more cyclical. Also note the trend divergence over the past 18 months. Over the same period, US technology earnings have had compound growth of over 9% compared to only 1.4% in EM/Asia. The good news is that EM/Asian technology earnings have improved compound earnings growth to more than 6% since 2015 and relative profitability improves if the major Chinese internet companies (US listed ADRs) are included in the Asian basket. The bull case is that EM/Asia technology trades at an 80% discount on price to book and EV/sales to the US technology sector. However, the discount on trend return on equity (profitability) is only 35%. Geopolitics, regulation and US sanctions might remain a secular risk to Chinese producers and internet companies more broadly.

The final point to note is that if trend weakness in the US dollar persisted, that would likely support outperformance of EM/Asian assets. With 62% of the world’s foreign reserves and 80% of global trade denominated in US dollars, a weak US currency tends to boost global growth. The Fed’s inflation promise and recent shift in the bias on its mandate suggests that they will remain extremely accommodative for an extended period and reinforce the prevailing bias on low future expected short rates. However, as we noted above, that is now a widely held consensus belief.

In conclusion, we like the EM/Asia barbell of exposure to both undervalued Asian banks and underappreciated Asian technology companies relative to the United States. The former would likely benefit from stronger cyclical expansion and higher rates, while components of the latter (internet companies) might be challenged if the discount rate increased materially. However, Asian technology stocks are also cyclical and have compelling secular growth as well. A near term risk for next year is the peak in China’s credit impulse (liquidity) which might contribute to a phase of consolidation by the June quarter next year.