The Asymmetry in Treasuries 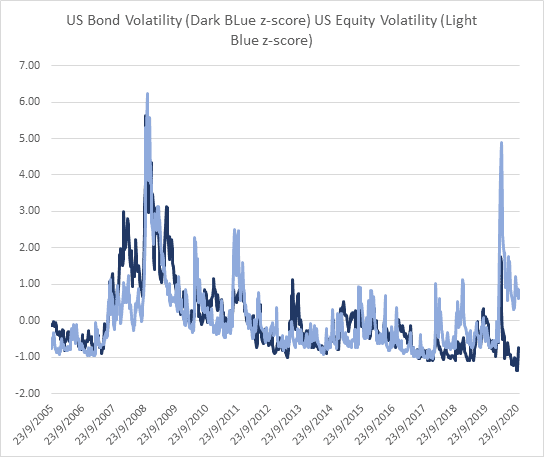 While the probability of a Democrat clean sweep or blue wave has increased to more than 70%, according to FiveThirtyEight, the Treasury market and betting odds remain more sceptical. Price action in the Treasury market also likely reflects uncertainty regarding additional fiscal stimulus. Although an agreement seems unlikely ahead of the election, the probability of large additional fiscal stimulus would rise if there was a clear result in early November. In contrast, the relative performance of Morgan Stanley’s Democrat/Republican equity baskets is consistent with a decisive Democrat victory. However, as we noted last week, the relative value and performance gap between technology and banks is still at a record wide. That is probably related to the anomaly in Treasury yields and future short rate expectations which drive net interest margins. The additional and related anomaly is the gap between fixed income and equity volatility. There are a few points to note.

First, after correcting in September, equity markets have recovered through the first half of October consistent with; 1) reduced odds of a contest election; 2) increased probability of a Democrat clean sweep; and 3) the ongoing recovery in growth and profits. While there remains uncertainty regarding additional fiscal stimulus in the near term or prior to the election, a decisive victory by the Democrats that would increase the probability of a large increase in spending following the result. However, the Treasury market and the betting odds remain more sceptical.

It has been widely observed that the polls underestimated the Donald in 2016. Moreover, even if someone predicted the outcome in 2016, it was not obvious how the markets would respond. The consensus belief in 2016 prior to the election was that Trump would be negative for equities. The opposite was true. With regard to fiscal policy, both sides of the political divide want to increase stimulus, the debate is about the size, scope or the priorities (tax cuts versus transfer payments or infrastructure). The big picture point for markets is that sovereign bonds appear mispriced or vulnerable except in the scenario of a contested election and gridlock. Stated differently, the asymmetry is in Treasuries; limited downside in yield but material upside in yields in a pro-cyclical outcome.

Second, as we have often noted, the low level Treasury yields also reflects anchored future short rate expectations until at least 2022. That is a legitimate anchor on the equilibrium level nominal 10 year yield. It is also the case that policy stimulus works with a lag. While activity has surprised on the upside recently, excess capacity from the recession (unemployment) remains unusually elevated and a weight on core consumer price inflation. Nevertheless, the gap between the leading indicators of economic activity such as the ISM manufacturing and 10 year Treasury yields remains large (chart 1). 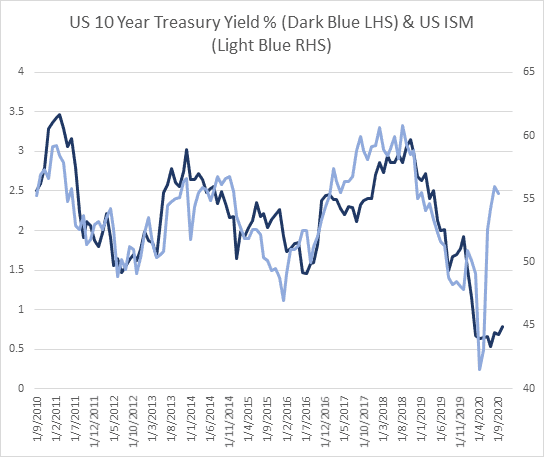 Third, there is also an interesting asymmetry in fixed income market volatility (chart 2). While short rate expectations have been anchored for legitimate (policy driven) reasons, the divergence between Treasury and equity market volatility is still unusual. If there is a clear outcome in November, and large additional fiscal stimulus, bond volatility is probably too low in outright terms and relative to equity volatility. Regardless of the election outcome, a recovery and new cyclical expansion is already underway. Under every scenario except a contested election or double-dip recession Treasury yields are probably too low on a medium term time frame. Moreover, a rise in yields would likely commence the long vanquished growth/value or technology/bank rotation within equities.

In conclusion, we have a modest pro-cyclical bias in our portfolios. From a tactical perspective, a pro-cyclical outcome is the most probable scenario regardless of the election result. Only a tightly contested election or gridlock would be challenging for risk assets and bullish for fixed income. A strong pro-cyclical result would be one that leads to large fiscal stimulus. In that scenario long bonds (30 year yields) a materially under priced and bank equities are under appreciated relative to US technology stocks. The latter would also be vulnerable to greater regulatory scrutiny under a Democrat clean sweep.