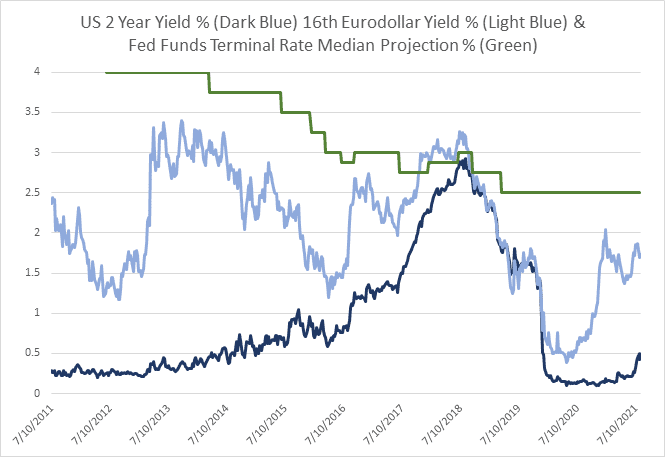 As widely expected, the Federal Reserve has started to taper its asset purchase program and retain flexibility on the pace of reduction moving forward. That has been well-flagged by the Fed for months, which reflects “modern” monetary policy of forward guidance and the desire to let the markets know what is coming well in advance. Indeed, some would argue that market participants have become too accustomed to the telegraph from monetary authorities, even if there have been occasions when pricing has pushed central banks into action. As we have noted before, forward guidance might be part of the problem as it has encouraged allocation into long duration assets, a rise in leverage and selling of volatility.

Even the recent episode in short term interest rates (and short rate volatility) has come in the context of relatively muted variability for longer-dated contracts which have been anchored by the Fed’s guidance on longer-run (terminal) funds rate. A proxy for the market’s expectations of the terminal rate is the 16th Eurodollar contract. While that has moved up recently (light blue line below) it remains below the FOMC’s terminal rate projection (green line in chart 1).

Looking further out, the key question for asset markets is whether a second wave of inflation next year driven by a wages or housing costs will lead to a shift in the prevailing bias on longer term neutral or terminal policy rates. For now, the consensus belief at the FOMC and among most market participants is that the neutral policy rate is approximately 2.5% and the overall low growth, inflation and rate regime is still a permanent state. An upward shift in that prevailing bias due to more durable (and less transitory) inflation pressure would have profound implications for markets and asset allocation.

One of the notable features of the post 2008 regime has been the capitulation in beliefs on the neutral or terminal policy rate. Since 2013, the median projection of the neutral Fed Funds Rate has shifted down from 4% to 2.5%. By mid-2016, at the time of the UK independence and global growth scare, the low rate, inflation and growth regime that some analysts referred to as “secular stagnation” was believed to be a permanent state. Of course, some features of the regime were genuine and are still important today. For example, the impact of technology, innovation and demographics (in most countries) as disinflationary forces. The probable antidote to secular stagnation is sustained and aggressive fiscal policy. That was partly implemented by the Trump Administration, but accelerated in response to the pandemic.

From a tactical perspective, the driver of near term inflation has been logistical challenges with global supply chains combined with the economic recovery and re-opening. In specific industries (e.g. oil and gas) it may also have been exacerbated by under-investment and the capital constrained private sector which is in turn a function of the global shift to “sustainable” investment. Some of the near term influences ought to improve over the coming quarters.

However, another important feature of inflation pressure is the gap between labour supply and labour demand. Ultimately, that is likely to contribute to a rise in employment cost inflation and higher wages. If there is a sustained wage-price spiral that is likely to lead to higher than average inflation over the current cycle and a higher rate structure overall. That would likely be disruptive to long duration assets where the prevailing bias is still anchored around lower-for-longer. Moreover, fixed income provides diversification for equities (and credit) in recessions, not higher inflation regimes. 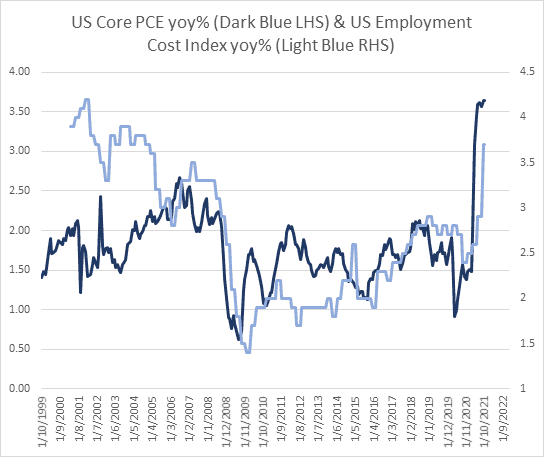 In the very short term, the US employment report (released today) will remain important for the Fed’s reaction function. While the Fed is focused on slack in the labour market (the shortfall in employment from peak) wage and employment cost pressures might be more accurate measures of inflation pressure next year and the risk around short and intermediate rate expectations. Given the recent strength in liquidity beneficiaries (NASDAQ and TESLA) a stronger-than-expected report might be the most disruptive for equity in the near term. In contrast, bank equities remain an inexpensive diversifier for this risk.

*On a side note, the weakness in Chinese High Yield credit has persisted this week with a knock on to Asian High Yield (given the 40% index weight). Asian high yield spreads are trading around 11% (1100 basis points) and almost 4 standard deviations above the average over the past decade (chart 3). There is also a large divergence between US and Asian High Yield. While the risk in China Real Estate is genuine (there is contagion and legitimate default risk) the relative risk compensation is episodic. More on this next week.