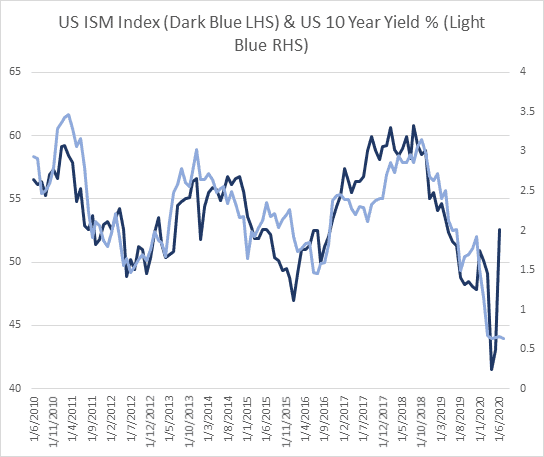 There are some interesting divergences (both bullish and bearish) between price and beliefs that have developed since early June. The Citi economic surprise index has had surpassed expectations at a historic rate. Similarly, the manufacturing and service sector ISM were consistent with a robust rebound in growth. However, liquidity beneficiaries, “stay-at-home” stocks or “growth” continue to outperform “value” in the United States, emerging markets and globally. The under performance of value relative to growth appears entirely consistent with stubbornly low Treasury yields. However, if the sentiment indices are correct and a broad recovery in the global economy is underway, sovereign yields probably ought to rise. Perhaps the same excess liquidity (M2 relative to industrial production) that is driving select parts of the equity market, is also supressing bond yields? A few thoughts.

First, the upside economic surprises relative to expectations are historic (chart 1). The Citi Economic Surprise Index is literally off the charts compared to the last decade. While this kind of ramp in the surprise index will normalise over the coming weeks (as expectations adjust) it is typical of the early stages of a post-recession recovery. 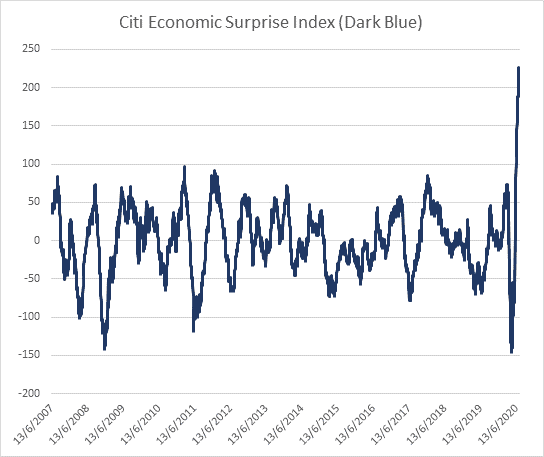 The obvious point is that analysts and investors might be underestimating the strength of the recovery. In addition, the economic surprise index is also consistent with the US ISM manufacturing and non-manufacturing for June (chart 2). On the negative side, it is curious that the 10 year Treasury yield (or the price of truth) remains stubbornly anchored near the March low. As we noted again last week, future short rate expectations near zero and the Fed’s asset purchase programs are clear factors supressing Treasury yields. Nevertheless, if the global economic recovery is robust, yields probably ought to have increased (at least a little) over the past few months as they did in the recovery from the trough in 2009. It is possible that sleepy Joe’s lead over the Donald and the increase in COVID spread over the past few weeks might reverse some of the recent strength in the macro data in the third quarter or explain why fixed income markets remain cautious.

Second, while the failure of Treasury yields to rise might be divergent with the recent economic surprise indices and the ISM, it is consistent with the sustained underperformance of “value” relative to “growth” within equities (chart 3). Stated differently, industrials, materials, energy and financials have lagged the broad market and technology. That is true in the United States, emerging markets and at a global level. It also explains US outperformance relative to the rest of the world. The Fed’s support for both dollar liquidity and the credit markets is well appreciated. However, it is also the case that real liquidity or the amount of money available in excess of industrial production plus inflation (activity) has never been greater. The big picture point is that the excess liquidity has found its way into financial assets and has benefited “growth” equities (technology) rather than “real economy” sectors like industrials, materials and banks (so far). 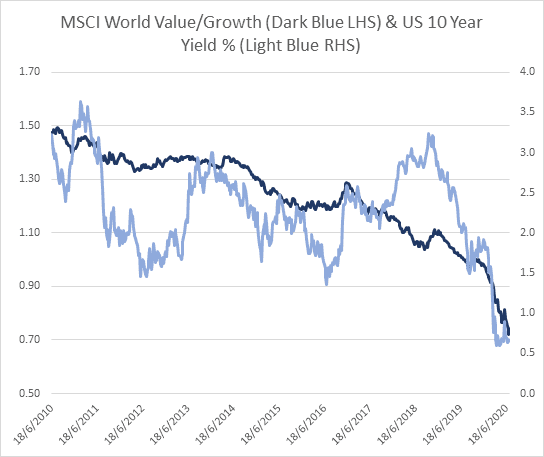 The final point to note and something to monitor over the coming weeks is that that the pace of the Fed’s balance sheet expansion has started to moderate (chart 4). While other factors that have signalled a correction in technology or growth stocks like a strong rise in Treasury yields, steepening of the yield curve, dollar strength or widening in credit spreads are not present, the second derivative of liquidity has slowed. 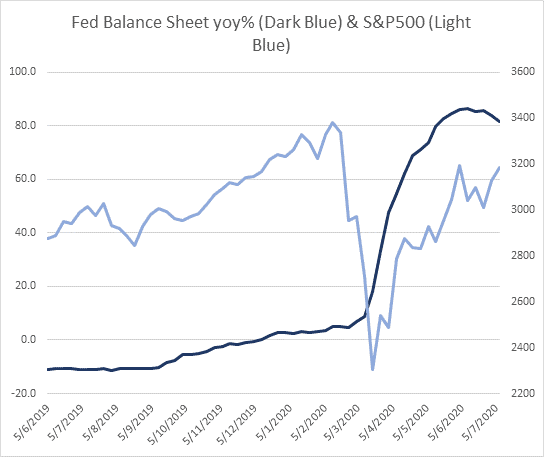 Of course, the record excess real liquidity already unleashed might push growth sectors like technology into a blow-off or bubble phase. The US technology sector trades at almost 6 times sales which is 3 times the S&P500 (which is also close to the 2000 peak on price to sales). In 2000, the technology sector re-rated to almost 8 times sales. While the major technology companies generate strong cash flows and returns on equity, growth sectors of the stock market increasingly appear divorced from reality. Ironically, the catalyst for a sector rotation might be a genuine cyclical recovery and rise in the cost of capital. As an aside, value trades at a 76% discount to growth on a global basis and 72% in EM. In conclusion, a signal for a renewed value rotation would likely be rising Treasury yields. 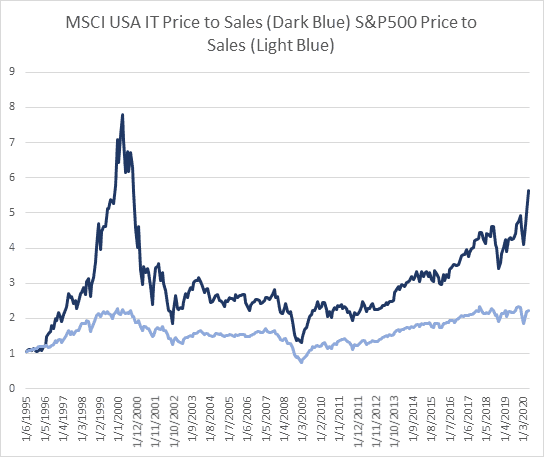