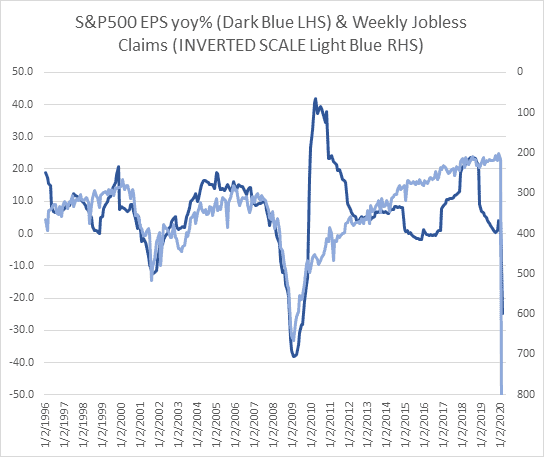 Nothing about this crisis is typical. The velocity of the decline in equities and credit, as well as the size and speed of the policy response are all unprecedented. The catalyst for the downturn was a virus. The cause of the contraction is the deliberate decisions of policymakers to stop activity. The episode has also exposed the magnitude of corporate leverage and levered “spread” or carry trades (naked swimmers). Conversely, the offsetting policy response has been unprecedented in size, breadth and speed. Notably, the $2 trillion US fiscal support package includes $454 billion back-stop for Federal Reserve lending, including the corporate bond and paper programs. The Fed Chairman suggested that the Federal Reserve can leverage that base ten-fold, so it can support $4.5 trillion of Fed lending – all on top of unlimited quantitative easing. Markets are always uncertain. However, with new developments arriving daily, short term swings in price have probably been driven by positioning and liquidity rather than investors making rational decisions. In that context, it is important to attempt to have a sense of what is priced.

There is an emerging consensus belief that developed economies will likely follow a Hubei-like template. That is, 1-2 months of severe quarantine will control the speed of COVID-19 and another month of quarantine will extinguish it. For economies and markets, that will lead to one quarter of shut-down followed, it is hoped, by steady revival. As a result, the profile of economic growth is likely to see a 30% (or so) collapse in the June quarter, followed by a fairly robust second half rebound.

At a global level UBS estimate that -0.5% global growth in 2020 would lead to a contraction of approximately 30% in world EPS over the full year. Of course, that is probably the best possible outcome. If lockdowns are extended from a few weeks to several months, EPS could decline by as much as two-thirds. Therefore, the key downside risk for markets is that the infection and fatality rates take longer to peak, extending the lockdown and shutdown of economic activity. That would undermine the prevailing bias that a recovery will get underway in the second half. As we noted last week and following the counter trend bear market rally, equities are probably priced for a typical recession and contraction in earnings of around 20%, rather than a continuation of the depression-like macro data and earnings downgrades (the chart below highlights the inverse correlation between US weekly jobless claims and S&P500 earnings per share – if record jobless claims persisted, earnings would likely fall by more than 50%). 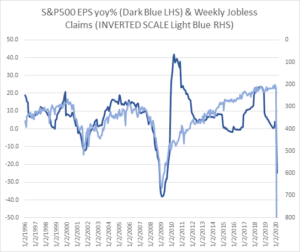 On the positive side, the sensitivity of the market to incremental bad news appears to be falling. That might suggest that we are in the early stages of “selling fatigue.” In addition, a range of volatility and skew measures have eased and high yield credit spreads have eased from the recent high and de-risking by systematic or volatility targeting investors appears to be well advanced. The additional positive is that the speed, size and breadth of the policy response has also been unprecedented. The upside risk is that restrictions on economic activity are lifted sooner, although that appears less likely.

On the negative side and as we noted above, if the infection and fatality rates take longer to peak, that will likely extend the lockdown and shutdown of economic activity. In turn, that would probably undermine the prevailing bias in a second half recovery. In conclusion, while some of the pre-conditions for a rally are in place such unprecedented policy support, and extremes in tactical indicators, the consensus belief for a second half recovery might still be too optimistic. From a valuation perspective, an extended shutdown is probably not fully priced into corporate earnings. Equity markets will probably re-test the downside before the ultimate trough is in place. However, this episode will create a multi-year opportunity to buy undervalued equities and credit.