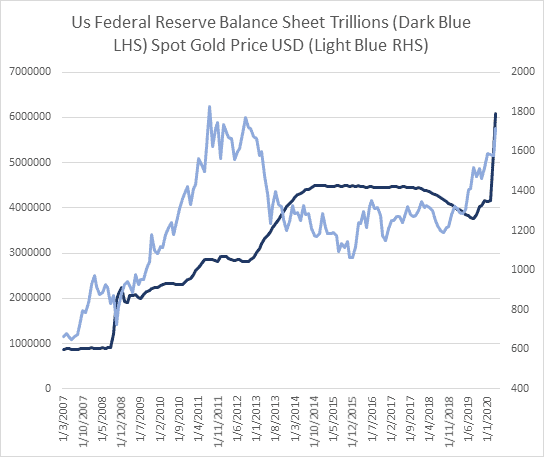 As we noted on Good Friday, in most historical episodes markets rarely make definitive lows this early in a recession. A multi-month period of contraction in growth and earnings tends to exacerbate known stress points and contributes to new ones that eventually lead to further de-leveraging and declines in risk assets. However, the strongest argument against a re-test of the lows is that the fiscal and monetary response has never been so large and broad this early in an economic recession. In particular, the Fed’s aggressive intervention again last Thursday highlights how aggressively “all in” they are.

From our perch, they will probably have to do even more as the economic shut down persists. While it is plausible that the veracity of the policy response might shorten the typical negative feedback loop from catastrophic data to persistently weak markets, what the Fed cannot do is make businesses open up and consumers act normally. In the United States Dr Fauci indicated overnight that a May 1 opening is probably premature and even if that was the case a swift return to pre-COVID levels of economic activity seems unlikely once it does.

Although a relief rally in equities and credit was likely given the extreme pessimism in late March and the overwhelming policy response, three residual risks to markets remain. First, a general risk is that the economic and earnings contraction is worse than already dire consensus beliefs. Second whether improvement in the healthcare crisis permits a meaningful relaxation of lockdowns and resumption of economic activity by May. Third, following the 25% plus relief rally in equities and narrowing in credit spreads, equity and credit markets might not offer sufficient risk compensation for investors in the near term. Clearly the Fed’s actions have helped ease pressure in the credit and funding markets which is also evident in the moderation in cross asset volatility. However, specialists in the credit markets continue to point to high levels of stress and 2008 levels of default risk.

In summary, while it might not be prudent to fight the Fed, our sense is that the credit and economic backdrop is still not all clear for an aggressively long equity position. The Fed could lift sentiment and risk perceptions further in the near term. However, as we noted above, what the Fed cannot do is make business open up and households return to pre-crisis levels of spending. Ultimately our sense is that we probably need to have greater clarity on the economic, earnings and credit stress before a definitive rally in equities can commence.

From a longer term perspective we also fear that the extraordinary action by the Federal Reserve and policy makers more broadly will likely contribute to serious issues of moral hazard and financial repression. As Jeff Gundlach expressed, “if everyone is getting a bail-out, then no one is… think about it.” Trying to save the economy is a laudable goal, but that does not mean that all of the measures taken are beyond reproach. While many of the policy support measures by central banks and governments’ have been targeted at saving jobs and protecting incomes, it is difficult to escape the conclusion that corporations have received the greatest bailouts. We remain unconvinced that sub-investment grade companies and lenders ought to receive a bailout or be rewarded for having taken on excessive leverage. That is the opposite of how capitalism and creative destruction ought to work.

The final point to note is that the measures are not free. The costs in the future will be in the form of higher taxes or eventually higher inflation and interest rates. Financial repression, phases of excessive government intervention, regulation and restrictive world trade have tended to be detrimental for productivity. For example, the phase from 1968 to 1982 was a particularly poor period in history for US trend productivity and profit margins. Similarly, trend productivity has already started to decline since the last crisis (dark blue line in chart 1 below). 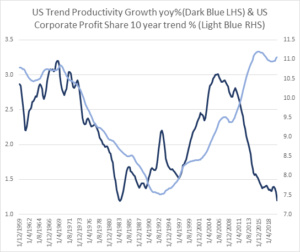 It might not be a coincidence that the decline in productivity has coincided with central bank financial repression and balance sheet expansion. However, the clear winner in these phases has been real money or gold rather than fiat money (chart 2). We are currently revisiting our basket of gold mining producers. 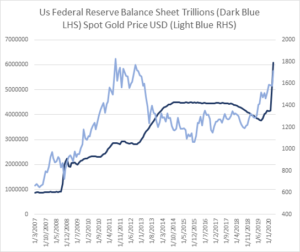