On the Highway to Sell? 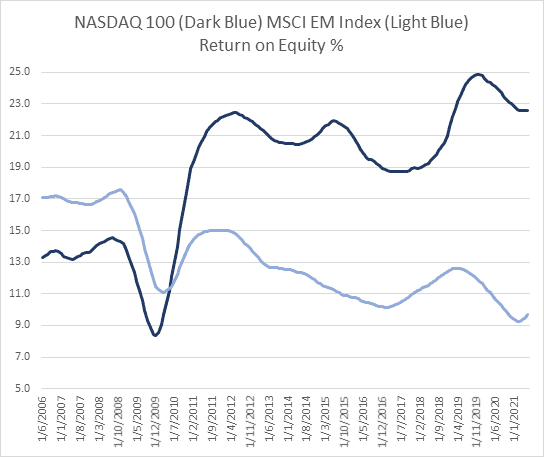 It has been a tremendous bull market in US mega-cap technology (FATMAN-G) stocks over the past few years. While outperformance was a function of the low discount rate and super-abundant liquidity, it was also likely due to superior cash flow, profits or returns on equity. The major US technology companies have also tended to have net-cash on balance sheet which gave them “defensive” characteristics during the pandemic. Those characteristics were also reinforced by the pattern of consumer spending when large parts of the world were in lockdown. However, for the first time (in quite some time) the guidance from some the mega-cap technology companies has struck a more cautious tone in this reporting season. Both the Fruit (Apple) and Facebook warned of slowing sales growth, while Amazon’s 3Q sales fell short of consensus forecasts.

The valuation of a growth market (or company) taken to its logical extreme can be almost infinite as the discount rate approaches zero. Of course, in the real world, risk premia do (and should) exist. While market leaders in some sectors have monopoly-like power, growth is eventually constrained by competition, new entrants, market size, regulation and available resources. The US Information Technology sector currently trades at around 7 times Enterprise Value to Sales. The ratio is similar to the heady days of the 2000 bubble. Of course, interest rates (and the discount rate) are well below the prior episode – the US Fed Funds Rate peaked at 6.5% in June 2000. Nevertheless, the US technology sector valuation is still trading at a very heroic multiple despite the low rate and favorable liquidity environment. Moreover, with a potential “taper” of super-abundant liquidity on the horizon and some moderation in future sales revenue, the sector may be vulnerable to a re-calibration of growth expectations and valuation multiple.

On the positive side, as we have noted previously, the outperformance of the US mega-cap technology sector has been warranted by superior profits or returns on equity. The time series below highlights the gap between the US NASDAQ return on equity and MSCI Emerging Markets (chart 1). Note MSCI EM had superior ROE prior to the 2008 crisis, however it has moderated in trend terms over the last decade relative to the NASDAQ and US equities more broadly. Moreover, the divergence in returns has occurred as the technology sector has increased to around 30% of the MSCI EM Index. Of course, the technology companies in EM tend to have more “cyclical” earnings with a larger weight to hardware and semiconductors compared to the peers in the United States.

In an Asian context, the recent correction in the technology sector has clearly been exacerbated by the regulatory crackdown in China. However, as we have noted, the underperformance of the sector and Asian equity more broadly has also likely been due to slowdown in the rate of credit and liquidity in China. The good news is that the correction has materially improved both outright and relative valuations. The EM (Asia) technology sector trades at a 76% discount on EV/Sales relative to the United States and the major Chinese internet names (Tencent and Alibaba) now trade at around 20-21 times forward earnings which is reasonable given their potential secular growth to the Chinese consumer.

While the recent regulatory crackdown might persist, it is more widely appreciated and priced. Although the prospect of a Fed taper is also a risk for Asian equity given the potential implication for the dollar and dollar liquidity, our sense is that Chinese liquidity conditions and the rate of change in credit growth might start to improve in the fourth quarter of this year. That said, the transition away from peak growth, policy and liquidity at a global level is consistent with the evolution to mid-cycle conditions and reinforces our bias toward companies with superior cash flow and balance sheet strength. In the medium term, secular growth is likely to remain important and the price for secular growth is now considerably more attractive in Asia. However, we are more cautious on a tactical basis in the short term and have hedged some risk accordingly.