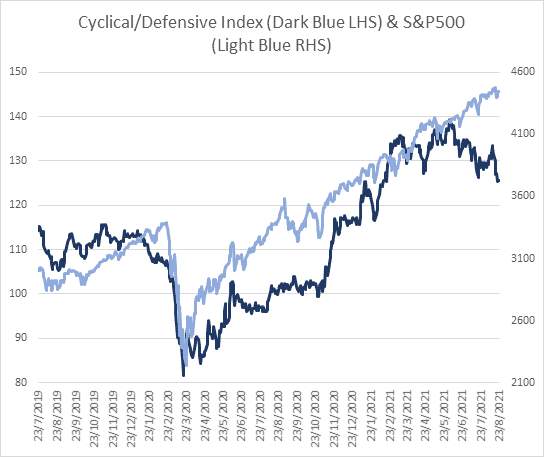 While investors are likely to be focussed on Jackson Hole later this week and any hint over the timeframe of the Fed’s taper, the mini growth scare continues to weigh on cyclical assets. From our perch, the prevailing bias has become too pessimistic on the cyclical growth outlook over the next few quarters. To be fair, another debilitating wave of the Miley Cyrus (Virus) has become a wrecking ball again for consensus growth revisions, re-opening and reflation trades relative to defensives and the S&P500 (chart 1). As we noted last week, it is also evident in commodities and commodity linked currencies.

The important point to note is that expansions typically don’t end until the Fed starts tightening or there is an adverse fiscal shock. Stated differently, macro cycles do not end until the output gap closes and policy normalises. The normalisation process is only just getting started and the equity risk premium remains abnormally high, particularly in EM and Asia Pacific. While the initial correction in Treasury yields from the April peak and reversal of pro-reflation trades has probably been warranted based on peak positioning, excess liquidity, policy and growth momentum, the pendulum has probably moved too far toward pessimism.

Our sense is that the reflation trade – cyclical stocks and bond yields – will likely rebound as delta variant fears subside (populations and policymakers learn to live with it) and the economic expansion renews its momentum. That is probable as pent-up consumer demand is unleashed in the recovery from the pandemic, and given still accommodative monetary policy. Of course, policy and liquidity will continue to become less accommodative particularly if there is a second wave of inflation next year. Or more accurately, labour costs start to rise as the gap between supply and demand in the labour market closes. The Fed will only tighten policy more aggressively if or when inflation rises sustainably above its target on a sustained basis. That is still a more plausible risk in 2022/2023 rather than today.

In a regional context, the mini growth scare has also been exacerbated by the credit, activity slowdown in China and the regulatory crackdown on key industries. While that is now well appreciated, it is probably not fully priced into Chinese and Asian equities at a macro level. Rather, our sense is that Asian equities could de-rate a few price earnings valuation points further using the 2015 episode as a benchmark. On the positive side, that would also likely set up some fiscal, liquidity easing and a rally in regional reflation trades in the fourth quarter of this year. However, in the short term we continue to have a more defensive posture.

One final tactical point is that credit tends to lead equity markets at major turning points and credit remains well behaved. However, as we have often noted over the past few months, the US high yield credit premium is back at pre-pandemic levels and tight in comparison to equity volatility and the equity vol premium. That said, there has been a modest trend higher in US high yield spreads from the recent trough (final chart). While we do not believe that high yield risk compensation is attractive, a material widening is unlikely until the macro cycle deteriorates and the Fed starts properly tightening.