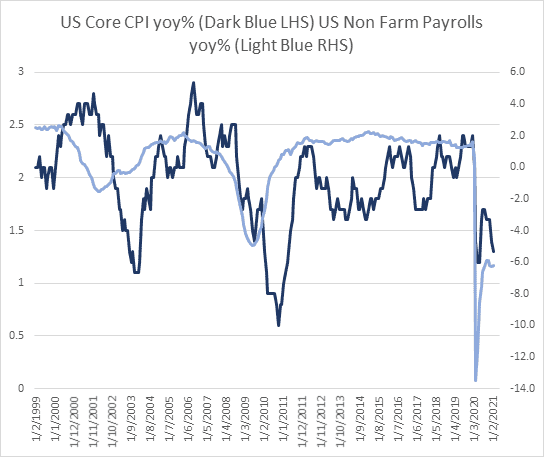 The good news overnight was that February US consumer price inflation showed little cause for near term concern. Of course, the base effects from the low prints in March and April 2020 will roll off the annual numbers over the coming two months. However, the big picture point is that current inflation and expectations are well below the level that would cause the Fed to contemplate lifting rates or changing the amount of QE. For markets, that will continue to steepen the curve and generate historic excess liquidity.

Nevertheless, markets are forward looking and cycles that are strong enough for long enough will eventually cause inflation. Investors are, quite rightly, assessing the potential impact of the vaccines on the re-opening and the king tide of liquidity and fiscal stimulus that has been hurled at the economy and markets. The good news, as we have noted recently, is that the core driver of (Fed defined) inflation is the amount of spare capacity in the labor and product markets. That remains large. The peak to trough decline in total payrolls was more than 13% in the 2020 recession and total employment remains more than 6% below peak. The time series below also highlights that inflation is a lagging indicator of the cycle. The annual change in employment leads inflation by at least 12 months (chart 1). On average, inflation has reached a trough 2 years after the end of the recession, so it will take some time before it is high enough to scare the Fed.

The implication for bond markets is; 1) US short rates are likely to remain well anchored for the foreseeable future; and 2) the Fed is unlikely to change the amount of QE. Sometimes it is useful to go back to first principles. The valuation of a 10 year bond is; the future expected policy rate plus a premium for inflation expectations (and/or term premium). If the future expected policy rate is likely to remain anchored at 0.25% that will lower fair value of the 10 year. Of course, the markets might eventually price much higher inflation, but an approximate fair value is the expected cash rate plus, say 2% inflation. Therefore, the fair value of the 10 year Treasury of the next year is probably not much more than 2%. Coincidentally, a behavioral bias known as “recency bias” or “anchoring” is useful in estimating market expectations of the value for the 10 year. Simply put, the 10 year Treasury has tended to be anchored around the 10 year moving average of the Fed Funds Rate over time (chart 2). 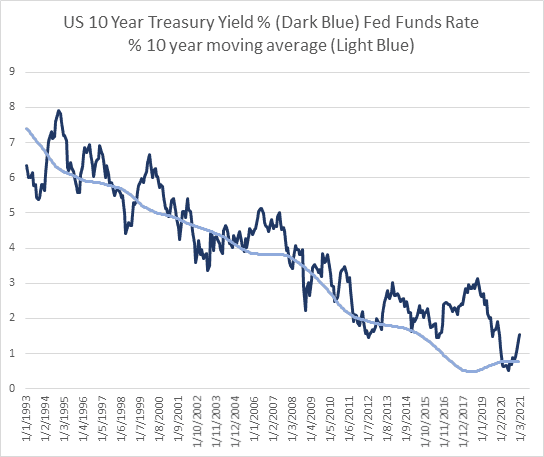 Notwithstanding our observation that superior earnings growth (in a low growth environment) has been a key contributor to the outperformance of “growth” sectors of the equity market, the recent impulsive trend higher in Treasury yields has coincided with the recent correction/consolidation in equities. The good news is that this counter-trend move is probably well advanced. Inflation is not likely to accelerate enough in the near term to scare the Fed and lead to a withdrawal of super-abundant liquidity (or tightening in financial conditions) that has fueled both the economic recovery and equities.

While a stronger cyclical expansion should favor companies with greater operating leverage, recent history suggests that a temporary rotation back into “growth” sectors may be near. We continue to hold a barbell of, value and growth at a reasonable yield in Asia Pacific (which includes some exposure to Asian technology).