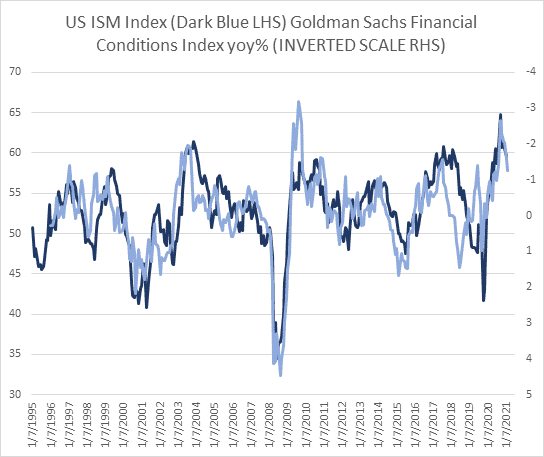 Having spent some of my formative macro years at Goldman Sachs underlined the importance that the Fed placed on broad financial conditions. Of course, that framework was reinforced by the former Governor of the New York Fed (Bill Dudley) who had previously been Chief Economist of the Famous Investment Bank. The emphasis on broad financial conditions makes a lot of sense, particularly in the United States where borrowing rates are tied more closely to the long end of the yield curve and not simply a function of the Fed funds (policy) rate.

Of course, the inclusion of financial market conditions in the assessment of policy transmission likely reinforced the reflexivity between Fed policy and equity prices and thus the criticism that QE is monetary policy for rich people. To be fair, if the Fed did not support the credit/funding markets during the crisis, it is probable that the unemployment rate would have been materially worse. Nonetheless, it has become increasingly challenging for the Fed to defend maintaining emergency policy settings and programs such as the mortgage backed security purchases given the improvement in growth, strength in house prices and recent inflation trends.

As we often note, markets care about the rate of change and while the “level” of real rates, credit spreads and financial conditions is still extremely loose, the rate of change is consistent with peak growth and liquidity (chart 1). The time series below highlights the relationship between the change in financial conditions and the ISM as a proxy for the cyclical conditions. When combined with the slowdown in the rate of credit in China, it is the probable reason why there has been weakness in markets most sensitive to the macro cycle. On the positive side, as we have consistently noted, it does not mean that the expansion is over. Broader macro cycles typically do not end until the Fed tightens policy. Jay Powell is likely to emphasize that point at Jackson Hole by suggesting that policy transition is merely “reducing accommodation” rather than tightening policy.

As we (and others) have also noted, the path of policy normalization is likely to remain dependent on further “substantial progress” in the labour market and reduction in the employment shortfall from pre-pandemic levels. The interpretation on the precise meaning of that benchmark is still not clear. However, our sense is that if there is another solid gain in payrolls over the next two months the Fed is likely to announce a taper at the September FOMC meeting and start a reduction in asset purchases in November. Other Fed Governors have suggested that the taper would likely proceed over the following 8 months, setting up the first rate hike for mid-2022. Of course, that will likely remain conditional on sustained progress in the labour market and, dare I say, the absence of a material tightening in financial conditions (read 20% drop in stock prices).

Our sense is that tightening in financial conditions is probably unavoidable, particularly if Fed normalisation occurs in the absence of policy tightening elsewhere as that might lead to a phase of US dollar strength and tightening in dollar liquidity that could have an adverse impact on emerging markets. Stated differently, we are not convinced that there is an easy exit for the Fed even if the process is well telegraphed. On the positive side, it is unlikely that the cycle will spontaneously combust or end due to the taper, particularly if it is accompanied by the release of private sector savings and pent up demand as the economy reopens. Put simply, a related correction in equities is probably an opportunity to add to cyclically sensitive assets.