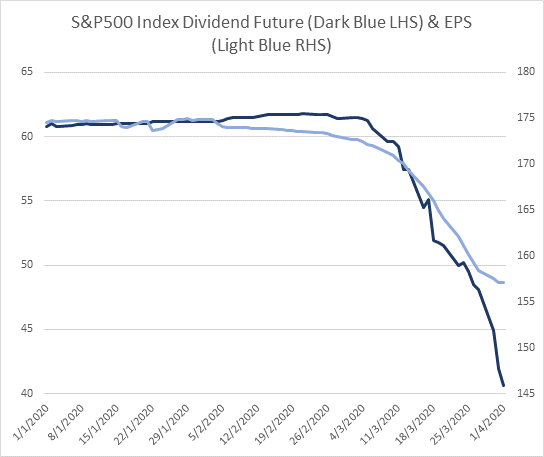 Back in February when Treasury yields started to approach zero and equity dividend yields started to rise (from a fall in price), the relative spread between the dividend yield and the Treasury yield or cash rate increased to a spicy or enticing level by historical standards. Of course, in contrast to the coupon on a fixed income security, dividends are conditional on the pay out ratio from cash flow or earnings. While the recent episode led to a rapid cancellation of stock buybacks (financialization or financial engineering), the decision by regulators in the United Kingdom and Europe to suspend dividends altogether was apparently a shock to some investors (HSBC plunged by 9.5% in Hong Kong trading on Wednesday). The action has been followed by the regulator in New Zealand and might also lead to a material cut or cancellation of dividends in Australia where they are an important component of the total equity return.

It is also interesting that dividend expectations as measured by the dividend swaps (future) might be a decent indicator of the near term trend in earnings. Europe has had dividend swaps for some time. The CME only launched futures on S&P500 dividends in 2015. In Europe, the dividend swaps can be influenced by structured product flow. However, in the United States although the open interest is smaller, the dividend futures appear to be efficiently priced. Over the past few weeks, there has been an impulsive decline in the dividend futures which likely reflects an anticipated decline in pay out ratios. More stable industries like consumer staples and utilities may have the capacity to retain dividends. However, many already had high pay-out ratios. Therefore it is important to screen for companies with fortress balance sheets and high free cash flow or the ability to cover dividends. Where CDS is available on individual companies, simultaneous high CDS spreads (credit stress) with high pay-out ratios are likely to see dividends get cut. The big picture point from a macro perspective is that it might also suggest that investors remain too optimistic on earnings per share (chart 1).

As we have often noted, a key lesson from history is to follow the leverage. A key implication of the current episode is that it has exposed vulnerability in the corporate sector. The catalyst was the virus. The cause of the correction was the shut down in activity and the collapse in cash flow at a time of elevated  leverage. US corporate debt relative to GDP started this episode at a record level (chart 2). Moreover, the Fed’s implicit role in the process was to maintain low interest rates and incentivise leverage which contributed to stock buybacks and other forms of financial engineering to boost earnings per share. 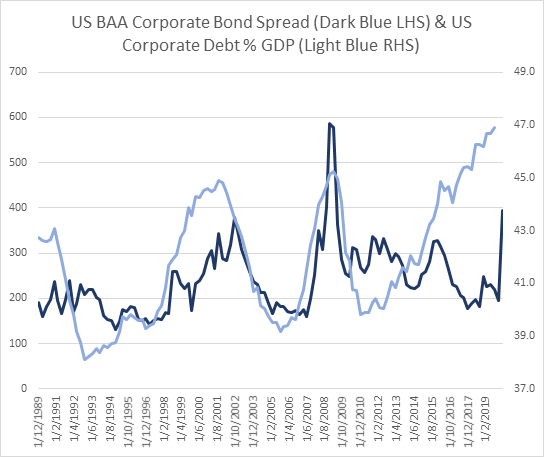 On the positive side looking forward, US investment grade corporate bond spreads have increased to an attractive level: around two standard deviations above the long term average. While still below the extreme in 2008, investment grade spreads have already priced a material decline in earnings (cash flow) and the associated damage of the potential downgrades (fallen angels). Ironically, the Fed’s easing measures and asset purchase programs are an important circuit breaker or support for investment grade credit (ironically because they contributed to the problem in the first place). High yield and leveraged loan spreads are also a recession levels in terms of the implied downgrades and defaults. However, similar to equities and the decline in dividend futures, our sense is that the full impact on earnings is not yet full priced.