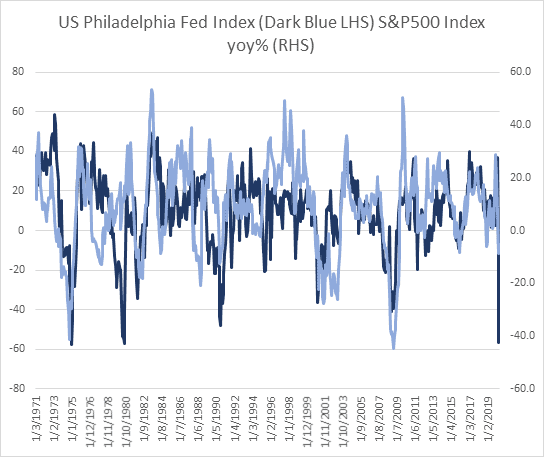 It is an obvious, but often overlooked observation that markets ultimately discount events before they become evident in fundamental news flow. In the recent episode what has been tricky for investors is that the anticipated economic and earnings revision trajectory has fallen so rapidly that it produced a swift decline in equity prices in advance of the macro news flow. The S&P500 started its rapid decline in the last week of February, well in advance of the deterioration of the deterioration in the macro news flow or economic surprise indices (chart 1). Similarly, the rebound since March 23, likely anticipates a fairly swift rebound in activity once economies open up from the lockdown and activity resumes. 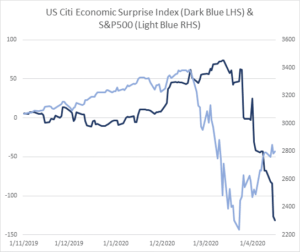 Of course, the recent episode also highlights the complexity of the price determination mechanism and the feedback loops or reflexivity between price and fundamentals. For example, the anticipated collapse in corporate cash flow impact on credit risk perceptions and the knock on effect to equities. In the later part of March and again last week, the Fed’s efforts to break the doom-loop between credit, liquidity risk and risky asset prices is a counter reflexive response. That has been relatively effective based on the narrowing of credit, funding spreads, decline in cross asset volatility and the rally in equity prices (chart 2). As we have often noted in the past, there is an intimate link between liquidity, volatility and leverage. Over the past few weeks, the Fed has already expanded its balance sheet by almost $2 trillion or by around 10% of GDP. That has obviously been supported by a fiscal policy response of similar magnitude. 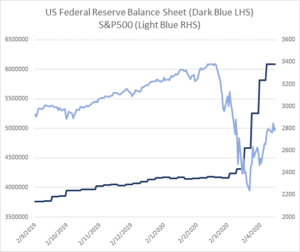 Looking forward, an excellent question posed by Cameron Crise is whether markets should also discount the depth of the economic recession or the duration. The depth is clearly going to be vicious based on the labour market data (22 million job losses in four weeks) and also based on the manufacturing surveys which tend to be correlated to corporate earnings. The Philadelphia Fed index declined to the worst levels seen in any recession over the past 50 years (chart 3). 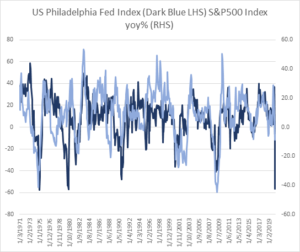 On the duration of the recession, it is plausible that the rebound could be as swift as the decline in activity. However, from current levels, US equities have already priced a relatively swift return to normal. Therefore, a lot probably has to go right with regard to the opening up of the economy over the coming weeks and the capacity of the economy to rebound. Ultimately, risk assets might be a lot higher by year end. However, we still fear that the magnitude of the recession also matters.

In conclusion, as the great man Warren Buffet famously said, in the short run the market is a voting machine – reflecting a voter-registration test that requires only money, not intelligence or emotional stability – but in the long run, the market is a weighing machine. In the long run, return on capital, economic growth, inflation and dividends paid (or returns to investors) ultimately matter. The depth of this recession suggests that there will be some longer lasting impairment to trend returns and investor risk perceptions. We have added modest risk in FX carry and credit, but do not feel compelled to chase equities in the very short term.