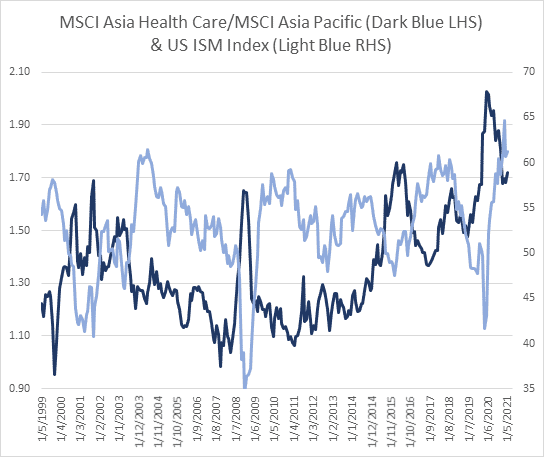 The impulsive sector rotation and flattening in the yield curve following the June FOMC, highlighted crowded positioning in reflation winners and interest rate sensitive assets relative to “defensive” ones. Even prior to the FOMC, investor enthusiasm for “reflation” and “inflation” trades had probably already topped, consistent with peak liquidity, policy and cyclical growth momentum. The good news is that policy conditions remain exceptionally loose and the equity risk premium is still abnormally elevated. However, the macro environment has probably started the transition to mid-cycle conditions (as Morgan Stanley have described it). That suggests a rotation from pro-cyclical leadership into “higher quality” growth-at-a-reasonable price.

Health care is a defensively orientated sector, which tends to benefit from lower sensitivity to rising rates. In an Asia Pacific context, the MSCI Health Care sector has consistently (and materially) outperformed the broad Asia Pacific index during recessions and growth scares (chart 1). In Asia Pacific, the Health Care has had 35% less variability in returns on equity (profitability) compared to the broad index. Clearly the sector has also benefited from the global pandemic, but gave back some of that out performance during the recovery, reflation and re-opening phase. In a US context, the sector was also impacted by political uncertainty from the new Administration.

From our perch, the “defensive” characteristics of an asset are not simply a function of the variability of cash flow, profits, balance sheet strength or sensitivity to rising rates, but also about the price you pay as an investor. The key challenge for the Health Care sector in Asia Pacific is the valuation. The sector trades at an 80% premium on an EV/Sales basis to the broad market up from a 35% discount in 2011 (chart 2). 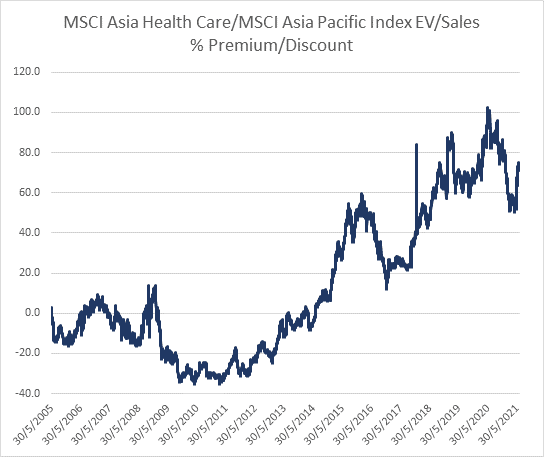 While some sub-sectors within Health Care have had strong secular growth, the re-rating is also likely a function of “volatility aversion” by investors and the de-rating in pro-cyclical sectors in Asia (and emerging markets) over the past decade. That is also consistent with the trend flattening in the 30-5 Year Yield curve, future growth and interest rate expectations (chart 3). 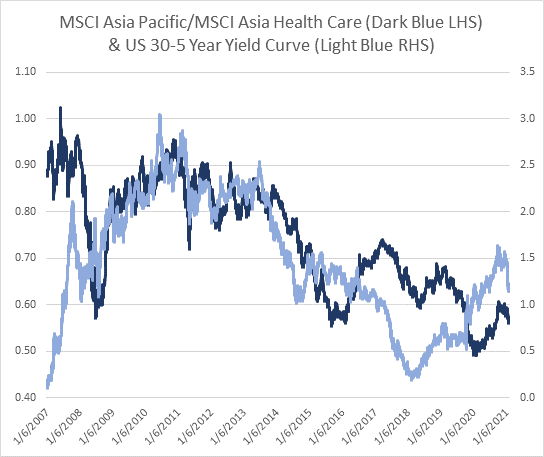 In conclusion, tactical risk might favour health care relative to pro-cyclical reflation and interest rate sensitive sectors in the near term, particularly if a hawkish Fed contributed to a flattening in the yield curve. Moreover, as the macro environment transitions to mid-cycle macro conditions that would also likely favour higher quality stocks (from a cash flow and balance sheet perspective). As a general rule, we also have a “quality” preference through-the-cycle (in terms of cash flow, dividend growth and balance sheets). However, the price you pay also matters for your future return and the health care sector trades at a fairly heroic premium compared to the immediate period following the 2008 crisis. Given exceptionally loose policy conditions it is also possible that pro-cyclical leadership persists for longer. In a medium term sense “value” sectors in Asia are still only marginally above 1998-2002 levels in relative terms.