The Most Comfortable Kits You Will Ever Wear

Heat and humidity can be detrimental to one’s race performance, affecting your form severely. It was through his own struggles with heat in triathlon races that set Noor Ashikin Aziz on this mission – to develop the most comfortable and cooling performance wear for triathlon, cycling and running.

Noor searched fervently for something that would help to keep him cooler and when he couldn’t find anything, that’s was when he decided to develop his own line of kits specifically tailored for the specific state of use in Southeast Asia.

This was how PURPOSE was born.

Taking a leap of faith, Noor resigned from his role as Executive Creative Director – where he managed a regional team of 75 staff members – in an advertising agency so he could focus on building PURPOSE with a vision of taking this Singaporean brand to the global stage.

With 25 years of experience in the creative field and zero knowledge in product development, Noor boldly put in all his savings to start something entirely new. Despite having to live on a shoestring, he was determined to build his dream against all odds; no matter how many curveballs life threw at him.

In October 2015, Noor met with an accident and shattered his right elbow, but he still powered through from his hospital bed as it was two months away from releasing the first batch of cycling jerseys for market testing.

PURPOSE was essentially a one-man show – Noor constructed the website, strategised the brand direction, executed the marketing and built the community while still recovering with his right arm in a sling.

After a year of testing and development, the first PURPOSE collection was launched in 2017 with the motto ‘The Most Comfortable Jerseys You Will Ever Wear’. To add, Noor designed and developed the products with the individual in mind – so all PURPOSE products are unisex, except for seasonal women collections.

That same year however, PURPOSE hit a wall when Noor’s savings ran out. Giving up on his dream was not an option, so he went to get a job so he could continue to fund the business.

For two years, Noor worked 18-hour days – in the day he worked at PayPal as the Head of User Experience and at night he worked on PURPOSE after training. It was only in July 2019 that he finally managed to stabilise the business and leave PayPal so he could focus his full attention on PURPOSE.

Starting with Singapore, the customer base has grown to include the rest of Southeast Asia, Middle East, Australia, New Zealand and the United States. The breakthrough for the brand came in 2019 when Dr Dan Plews was searching for a trisuit to cope with the heat at the Ironman World Championship in Kona. Dr Plews found PURPOSE and wore our trisuit for the race, which he won as overall fastest age-group athlete and secured the age group world record at the same time. PURPOSE and Dr Plews then collaborated on creating a PURPOSE x Endure IQ x SFuels trisuit and cycling top. It quickly became the brand’s best-selling trisuit.

In the region, PURPOSE has become a popular choice for triathlon and cycling clubs – companies like Hewlett-Packard Enterprise, Facebook, and others have their trisuits all custom-made by PURPOSE.

The Muslimah range by PURPOSE – which includes a sports hijab and full-length trisuits – is also another key highlight of the brand. This collection has encouraged more Muslim women to participate in the sport with ease and convenience. Previously they had to layer themselves with different pieces just to race!

Ultimately, the vision for PURPOSE is to become a global performance wear brand, proudly hailing from Southeast Asia. 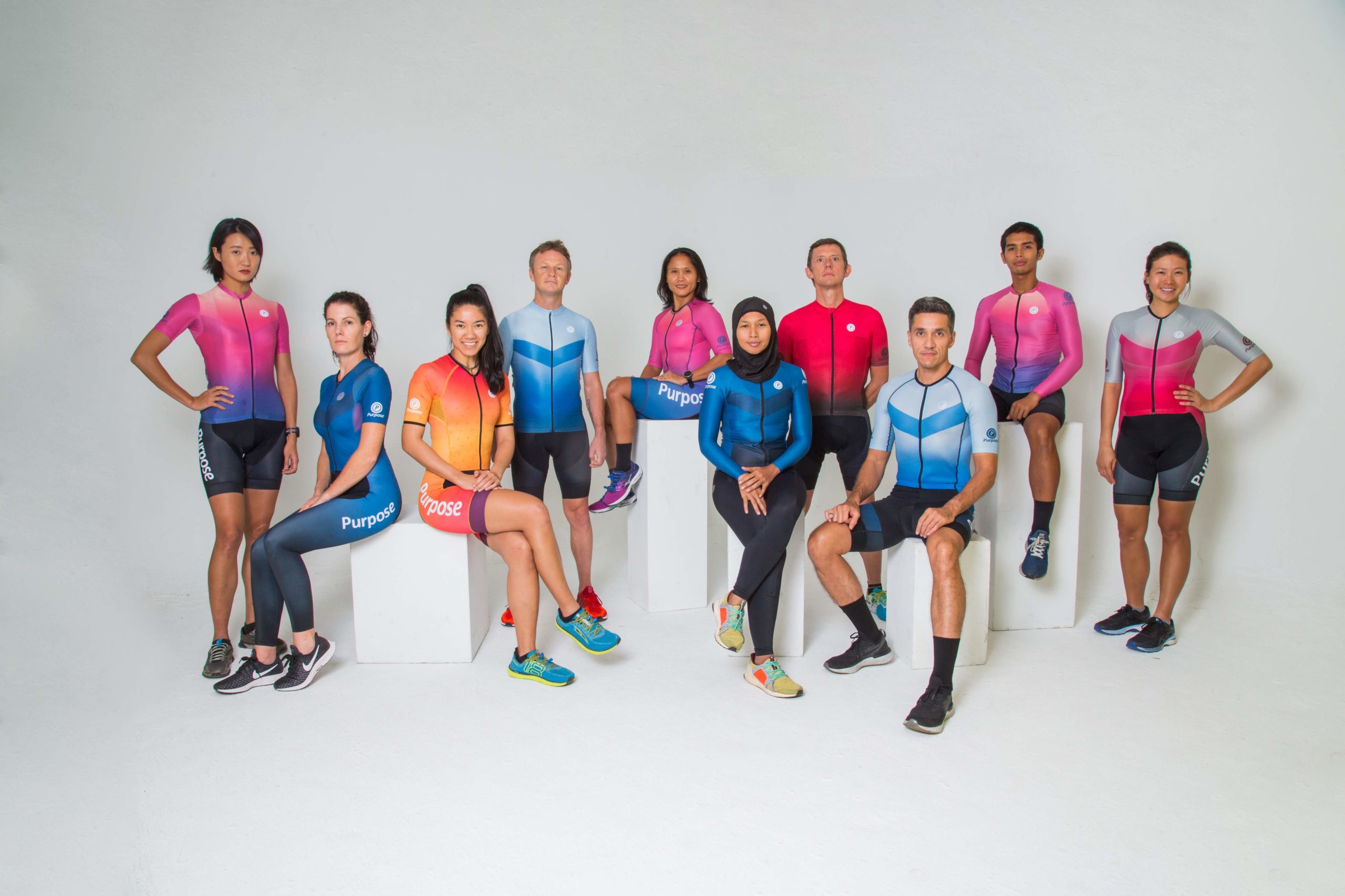 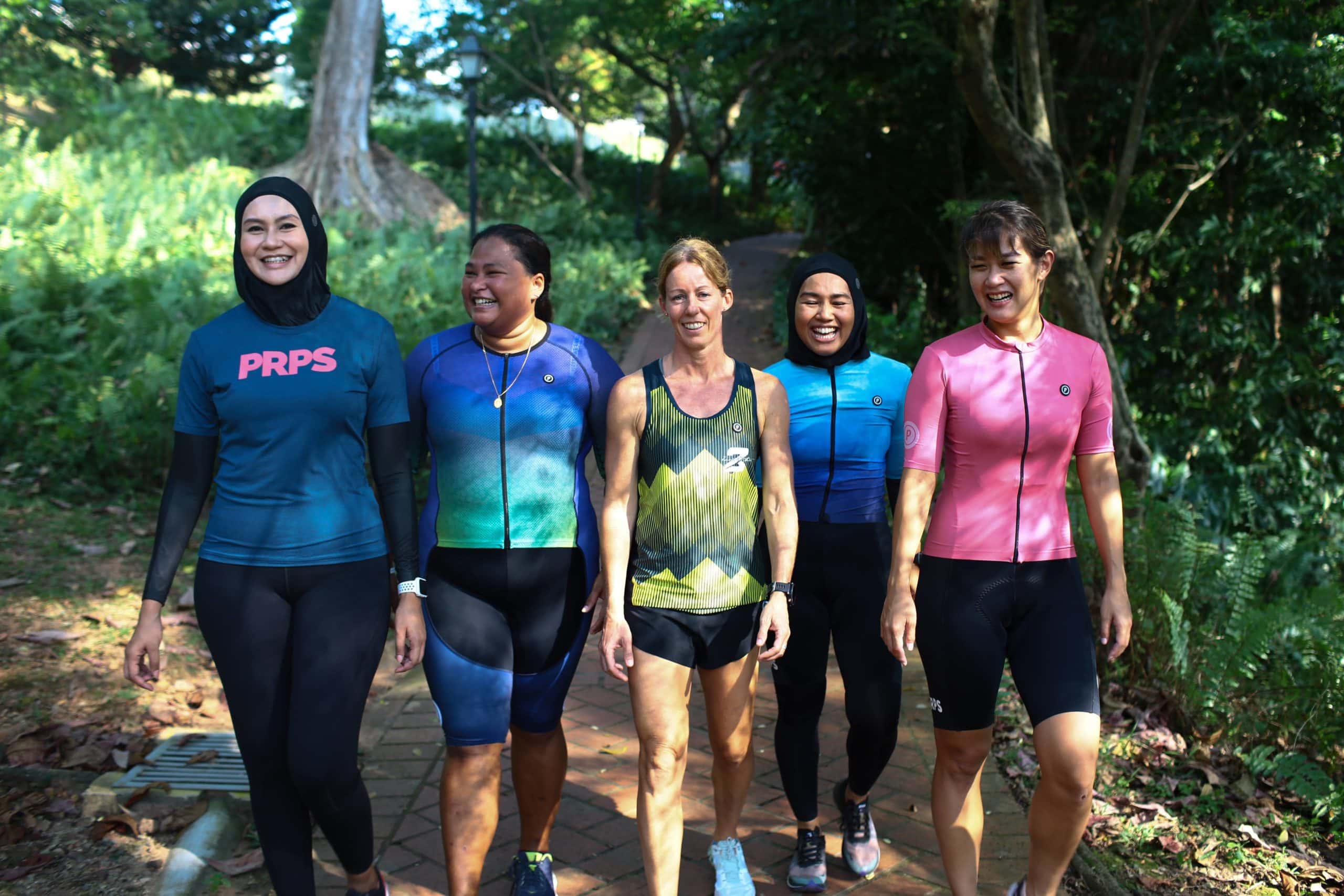